Here it is, everyone -- your chance to choose your books for 2015. After reading your responses and thoughts for next year, I've decided on a method to choose our books for each month. It's on a first come, first served basis, so don't delay!

I will hold off selecting my categories until at least one or two of you have a chance to look. Otherwise, that's probably cheating. Lol! Have at it!

So, since I'm terrible at making decisions ... I didn't make one! We're doing both themes and also choosing one book you've already read (unless you want all new books -- definitely up to you when you're deciding, but here's your free pass to do so -- whether you need a month off or just really want to share something you loved).

Below I've listed out the categories I came up with. Obviously some books will fall under multiple ones, so just choose the best fit. As you'll see, there are more than 12 categories to choose from. I don't want anyone to feel stuck with the "leftovers" so even if you see this post last, you'll still have options.

What I'd like is for you to each choose 3 from the list and let me know in the comments which ones you're taking. Once they're taken, nobody else can choose them. That way, I'm hoping we'll end up with a good variety of book types, even though some of the categories are generic on purpose.

Once people start posting their suggested books, please let us know if you've already read any of them. I'd rather not have a month where everyone has read the book already!

Without further delay, your choices are:

2. Female Author (because women are awesome)

3. Science Fiction/Fantasy (not just for geeks!)

4. The First of a Series (so you all get sucked in -- mwahahahaha!)

5. A Book Made into a Movie (but the book was better, of course)

6. Biography/Autobiography (every life is interesting)

8. Mystery/Crime (because mind puzzles are the best)

11. Never Got around to Reading, but it's Been on My List Forever (so I can cross it off finally!)

13. Historical Fiction (because sometimes you just want to read a good story in a specific setting)

16. Foreign/Translated Author (you'd miss out if you only read stuff by English speakers)

18. Adventure (don't we all want to live vicariously once in a while?)

19. Coming of Age (growing up may be awkward, but it happens to everyone)

20. Bonus Category (if it doesn't fit into one of the above, suggest your own!)

**UPDATE: Also, I apologize, but somehow I forgot to post the December book reminder! However, I don't want to bury this post before we make some more progress on our 2015 list, so I'll just put the reminder here. Sorry for the forgetfulness! 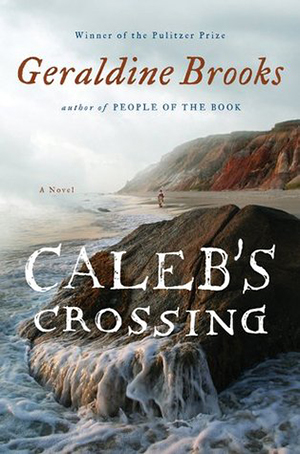 Synopsis: Once again, Geraldine Brooks takes a remarkable shard of history and brings it to vivid life. In 1665, a young man from Martha's Vineyard became the first Native American to graduate from Harvard College. Upon this slender factual scaffold, Brooks has created a luminous tale of love and faith, magic and adventure.

The narrator of Caleb's Crossing is Bethia Mayfield, growing up in the tiny settlement of Great Harbor amid a small band of pioneers and Puritans. Restless and curious, she yearns after an education that is closed to her by her sex. As often as she can, she slips away to explore the island's glistening beaches and observe its native Wampanoag inhabitants. At twelve, she encounters Caleb, the young son of a chieftain, and the two forge a tentative secret friendship that draws each into the alien world of the other. Bethia's minister father tries to convert the Wampanoag, awakening the wrath of the tribe's shaman, against whose magic he must test his own beliefs. One of his projects becomes the education of Caleb, and a year later, Caleb is in Cambridge, studying Latin and Greek among the colonial elite. There, Bethia finds herself reluctantly indentured as a housekeeper and can closely observe Caleb's crossing of cultures.