So, thanks to what I assume must be an unusual coincidence, we got two Friday the 13th's back to back in February and March this year. (There will be another one in November!) Last month, it was a totally normal day (not that I'm superstitious and expected anything different.)

But today, it was apparently our turn to experience the full effect. We had a minor car accident first thing this morning before the sun was even up. Nobody'shurtdon'tworry! But still, now we have to deal with insurance and repairs ... blurggggg...

We went to the gym this morning, against our better judgment. Haha. (Actually, we are generally morning workout people because it helps to get it out of the way and it makes me feel more energetic at work ... except on the days we do strength training because my body is just not ready for that business at 6:00 a.m.)

But this week has been super hard, coming off my everlasting cold and then dealing with the time change. Sooooo tiiiiired...

So, we had skipped a couple of workouts this week and we figured the least we could do was walk the treadmill for a bit today. After the gym, we jaunted across the street to Panera to pick up breakfast before heading home.

As we were sitting at the light, waiting to get our left-turn arrow, I noticed a car making a left turn into the plaza we were waiting to exit. As it did so, an SUV going straight apparently did not see it and hit it at full speed. The car spun around once or twice and made a stop by colliding into Adam's car.

It only jolted us a little bit, but there was nothing we could really have done to avoid it. There just wasn't time to reverse and there was a truck behind us also, so I'm not sure how much room we had. 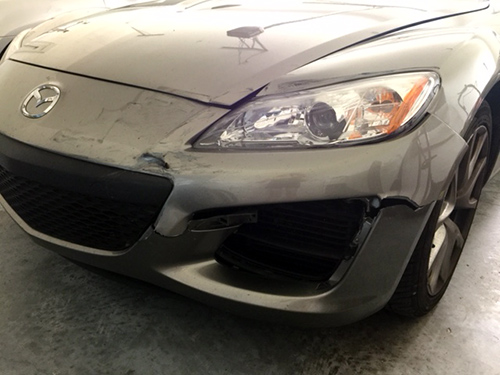 It's not the end of the world. Very fortunately, nobody in any of the 3 cars involved was seriously injured. The smaller car had a younger, maybe high school- or college-aged girl who went into an immediate panic attack/hysteria over the shock of it, but thankfully, her car was struck on the rear passenger side, so she wasn't hurt ... although her car was definitely done. (She was going to work at the McDonald's we were sitting right next to, so she kept repeating how she didn't mean to do anything, she was just trying to go to work. I felt really bad for her.)

The SUV driver's airbags went off, so he had the wind knocked out of him and probably will have a bruise, but it could've been worse for both of them and thankfully wasn't.

To this moment, I couldn't even tell you whose fault it was. I'm not sure if she was running her turn light or not, and it also seems like the SUV driver should been paying attention and slowed down.

I kept watching her slowly turn toward us and his SUV keep barreling forward, wondering whether they were going to notice each other at some point. And then, as her car spun around toward us after the collision, I kept thinking, "That car is going to hit us." And then, of course, it did. 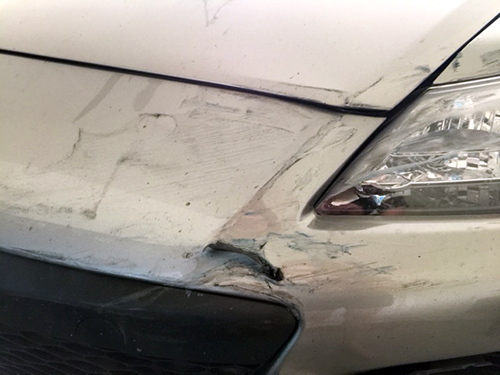 Fortunately, Adam's car is still drivable and he's already filed the claim online, so hopefully we'll get the body repairs taken care of without too much damage to our wallet.

I think the worst part of the whole thing (deep sarcasm here) was that after we finally got home an hour later and reheated my breakfast sandwich, I bit into it only to find out they gave me the wrong one. Paneeeerrrraaaaaa!!!!! *shakes fist*

Two more pictures for you. 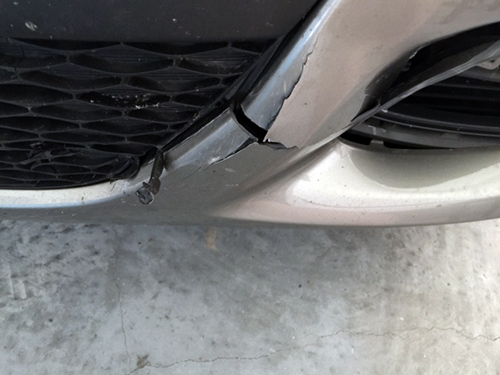 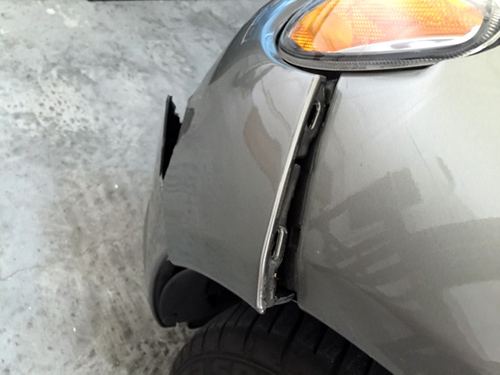 Stay safe out there!