I’m on Fire! No, literally…

Well, I burned the crap out of my left hand last night. And pretty much every time I (you, we, everyone?) get burned, it's my own dumb fault. I have this fantastic recipe for cooking brown rice in the oven. It requires no babysitting, it never sticks and it comes out incredibly fluffy every time.

Unfortunately, I left the square glass baking dish that I normally use to make it at Andee's house, so I tried cooking a batch in one of my oven-safe saucepans. Do you see where this is going?

I was down the hall doing something else when my timer went off, so Adam grabbed it out of the oven for me.

About five minutes later, I walked back over to serve it onto our plates and my brain just totally forgot that that pot had ever been in the oven, especially since I hadn't just pulled it out of there myself and, yes, I grabbed the handle.

I mean, to be fair, you don't normally expect handles to be 300 degrees (or whatever it had cooled down to at that point), so I can't entirely blame myself for the error. At the same time, I obviously knew that it had been in the oven since I originally put it there, so I've felt like an idiot ever since.

I couldn't even release it right away because I had grabbed and turned in one motion (toward the counter our plates were sitting on), so I had to turn back to set it down (it was either that or let it hit the floor, which would have been disastrous in other ways).

I cannot describe how painful it was for about 7 hours last night.

It's mostly a first degree burn, but I do have a pair of blisters on my first and second fingers where the weight of the handle rested, so in at least those two spots, I think that would make it second-degree.

I'm also slightly burned on my palm ... basically everywhere the handle of something would contact the grip of your hand. That also made it awkward to apply cold packs because of all the angles.

At any rate, I didn't get to sleep until the realm of 1:00 a.m. Thankfully, Adam has me bandaged up good today.

(Also, the rice turned out perfectly.) 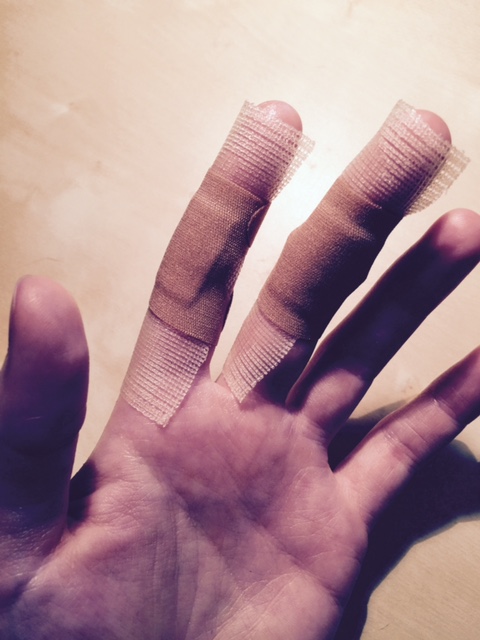