So, here’s week 2 of the March visual food diary. I feel pretty good about it overall. I still have some tweaks I need to make, but let’s dive into that slowly…

I got in lots of healthy foods. Even my bread is Ezekiel whole grain, which has no preservatives or flour. I could probably try for more veggies here and there, but overall, I’m happy with this week.

And that avocado toast below may not look like much, but I stole a recipe idea from a restaurant we ate at while in New York and it is amazing! The avocado is just mashed with a few squirts of lime juice. But I sprinkled it with citrus cumin salt (the citrus is lemon zest) and it makes it taste like magic. Sooooo goooood!!!!

My only nitpick for this week is the 4 desserts. However, I also don’t feel teeeerrible about it and here’s why…

The main reason for my 2-drink, 2-dessert rule for 2016 is to limit my sugar intake, not because I’m worried about weight gain (hard to do when you exercise every day). I just want my calories to come from mostly nutritious foods. And despite what the recent pictures show, I do actually stick to that guideline most weeks.

Each week is different though, so the math can’t be perfect. For one thing, we had company twice, so there were small desserts in there that I wouldn’t have on a normal basis. And honestly, the vanilla pound cake and the snack Weight Watchers ice creams are all pretty tiny. (Those snack-size ice cream bars are 80 & 90 calories each, depending on which flavor you grab.)

(In case it’s confusing, the 4 desserts I’m counting are from Sunday, 3/6 through Saturday, 3/12 because that’s what I consider a normal week. However, picture-wise, those are spread out between post #1 and this one because I’m doing these pictures according to “March  weeks” and the month started on a Tuesday … if that makes sense … so the posts run Tues-Mon.)

The only dessert I feel kind of guilty about was the Saturday ice cream bars because I wasn’t intending to have dessert that day, but my metabolism is so stinking high right now from my workouts … and that fish taco dinner was probably sub-500 calories … I was still sooo hungry! And I have one unbreakable rule: If I’m hungry, I eat. So, it is what it is. *shrug*

But that gets to my original comment of needing to tweak my diet. I’m used to eating lighter meals/smaller portions, but now that I’m exercising a lot, I need to make them a little bigger. Not unhealthy, just larger. Because I don’t want to finish dinner still feeling hungry on a daily basis and then turn to dessert to fill up.

Well, this week, one of our meals is spaghetti and meatballs, as you'll see in the final pictures from today, and we almost never eat pasta, so I’m thinking that’ll definitely fill me up. I’ll get this calories-in to calories-out adjustment down eventually! 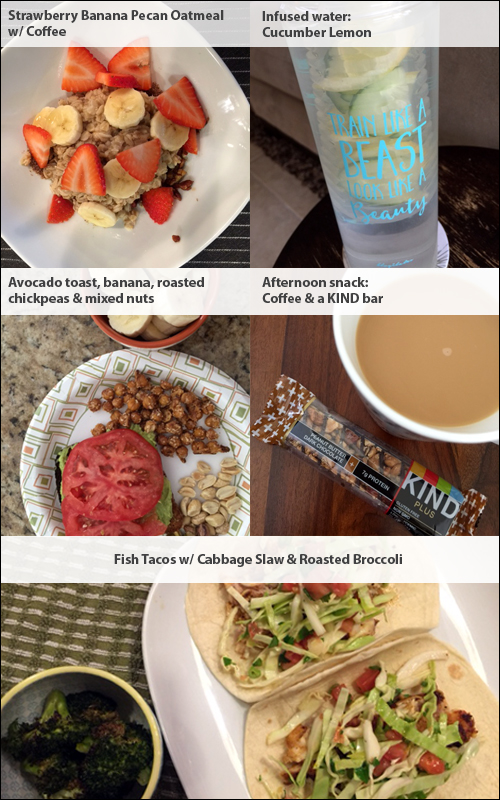 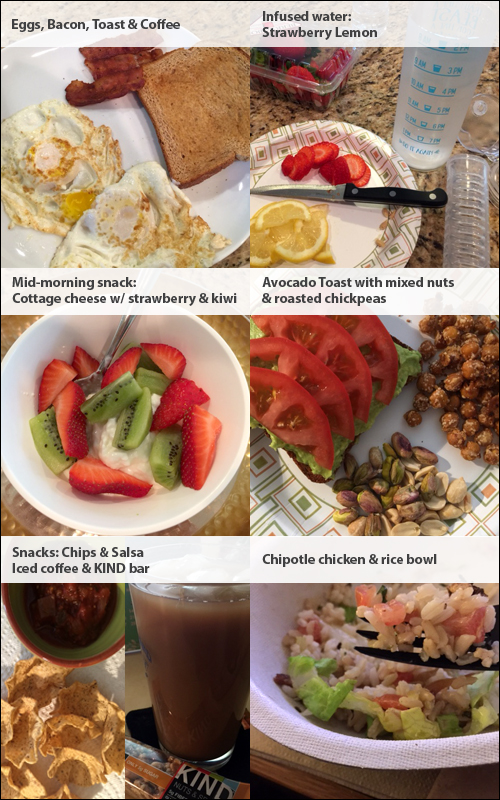 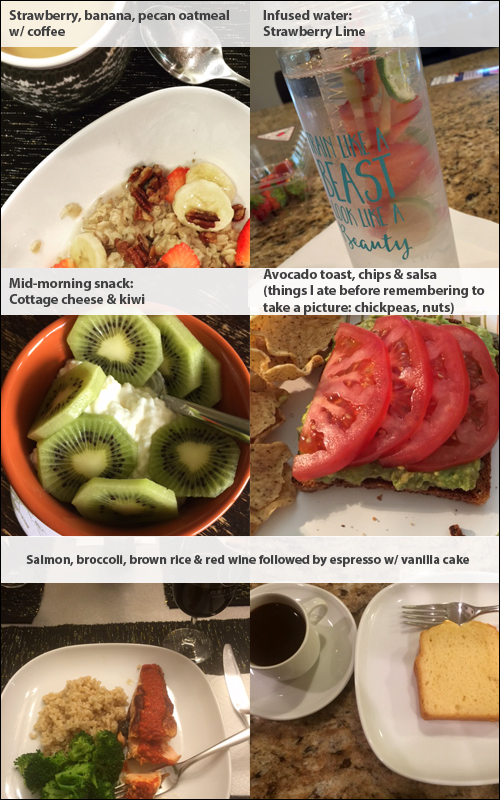 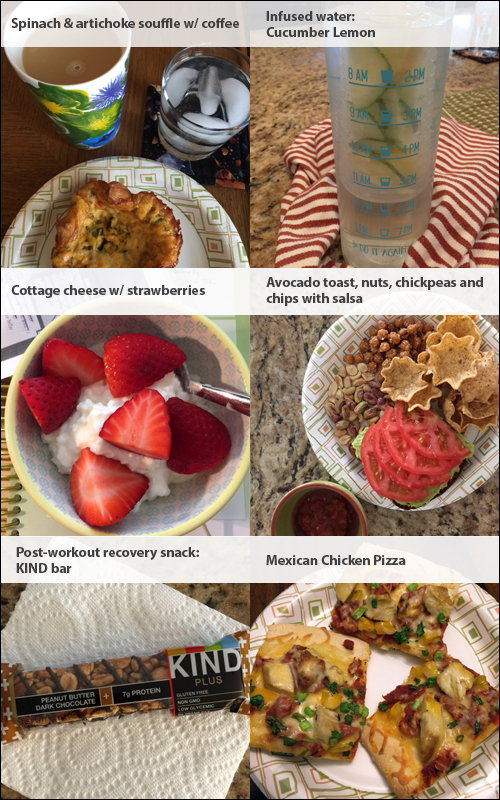 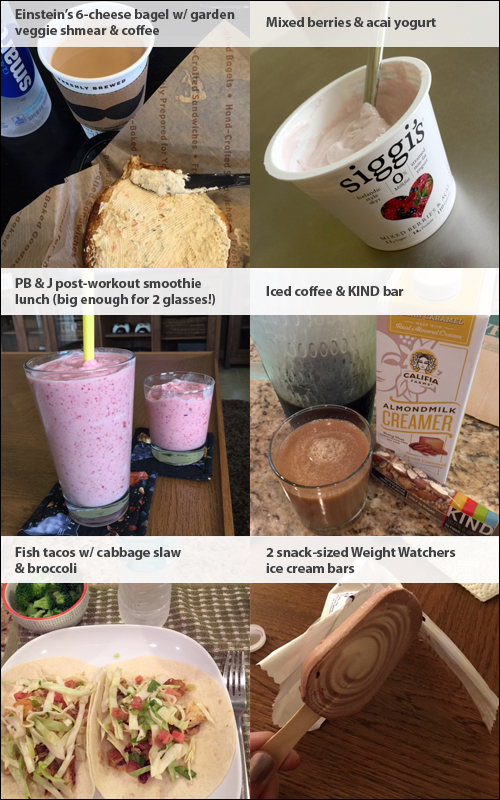 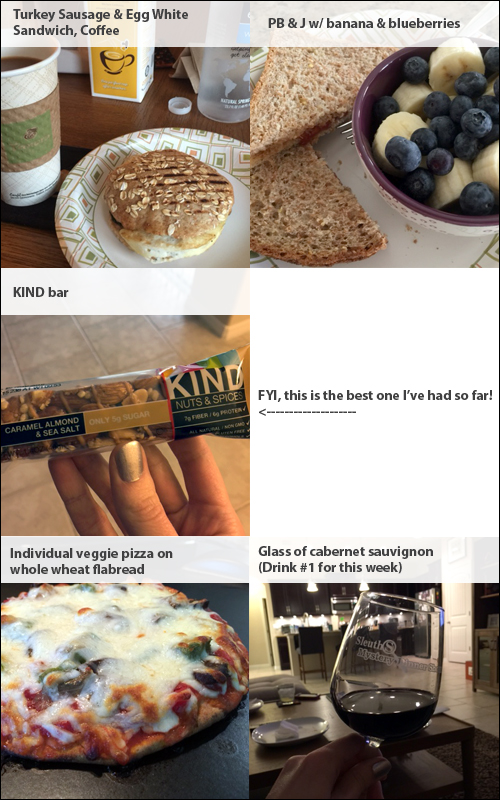 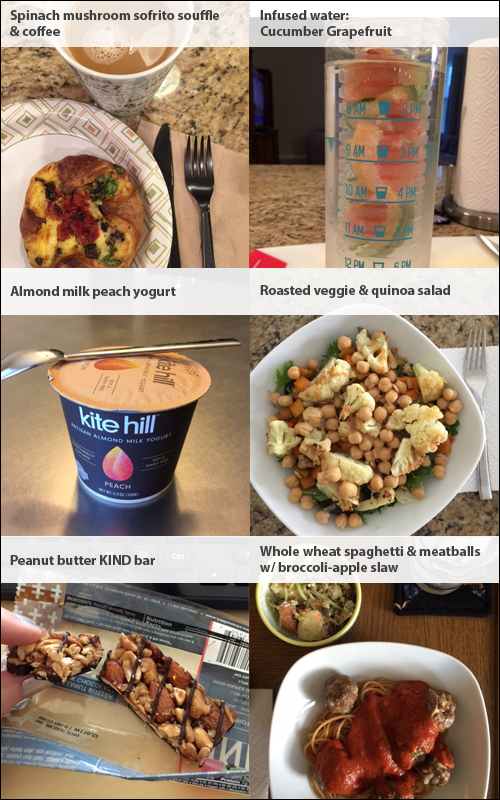 Doing well so far this week! One glass of wine and no dessert so far. Yay!!!