My Time in Music City

I've been back from Tennessee for a few days now and finally found some time to post a few of my pictures. I never get to see as much of a city as I want to when traveling for work simply because of the obvious -- no car and limited free time. But I still got to wander around a little and eat at some really neat places.

Also, in case you don't go back to older posts, I did just reply to everyone's comments on my trip announcement post just before this entry, but I was delayed because I'm having Disqus issues. It's stopped notifying me of comments over email, so I'm trying to get that fixed. Anyway, didn't want you to think I ignored you!

Oh, and one other thing -- you may not even notice, but somehow my phone was set to taking square photos  before I noticed after a while, so these pictures may be different sizes. I finally switched it back to "photo". Lol. Technology, am I right?

The first place worth mentioning is my hotel, though I didn't think to take any pictures of it. The reason it's worth talking about is because the building used to be a bank that was originally built in the '30s. So, the whole interior feels like a trip to the past because it's got gigantic ceilings with beautiful woodwork. And as you walk straight into it, there's a revolving door and a huge hall ahead of you where you can imagine all of the bank employee desks lined up in a row, like you've probably seen in movies.

Anyway, I thought it was pretty neat.

Next up is a restaurant we planned an event at on the first night of the conference. It's called Merchants and definitely feels older, but had amazing food. We actually took an elevator up to the floor where our event was being held. This is the building. 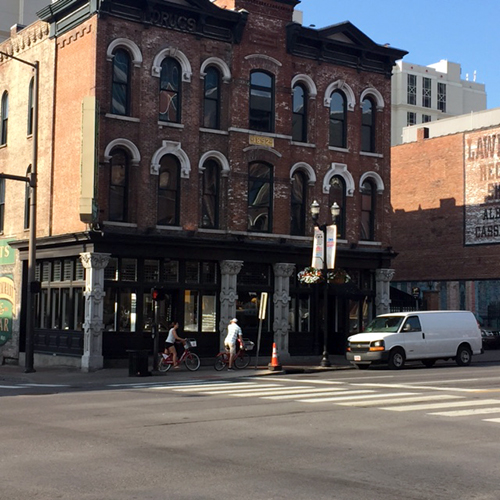 Nashville is kind of a wonderful mix of old and new. And if you haven't been there, the main area of downtown, Broadway, is a crazy Vegas-like atmosphere every night, with competing live music (mostly country, obviously) on every corner. They don't call it Music City for nothing!

I didn't get any nighttime shots, but you can see some of the vintage signage here, including the guitar sticking out a little further down the street. 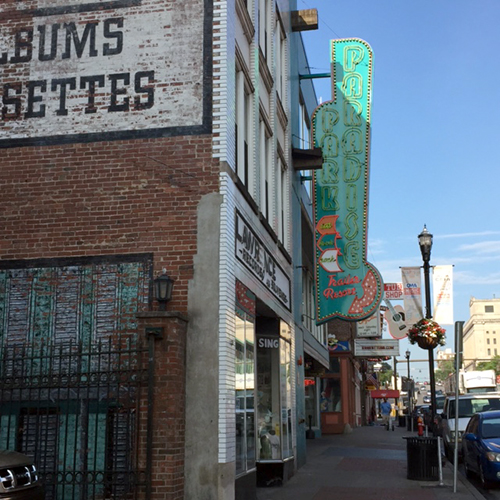 A couple other neat buildings actually face each other just a few blocks from this photo.

First, here's a small piece of the Country Music Hall of Fame. 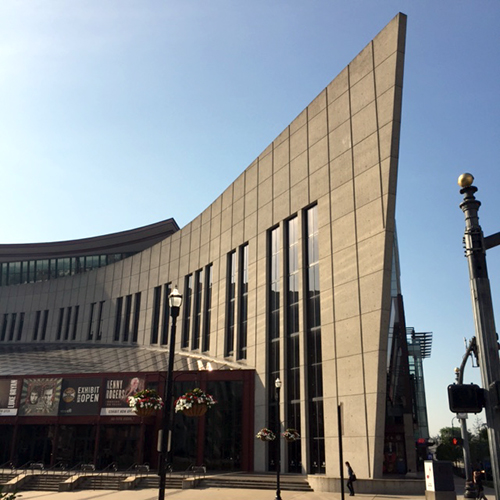 The only chance I had to walk around and take pictures was the last morning I was there before I had to head to the airport, so the sun is a little harsh and also I was way too close to get a good shot of the whole building.

Truth be told, I'm sure you can find way better pictures of all of these landmark buildings online, if you're interested.

Anyway, I didn't get to see it, but apparently during our conference, there was a big ceremony honoring Loretta Lynn and Jack White, who were getting stars on the Walk of Fame. One of my coworkers actually got pictures! I found the details in this story.

The building our conference was in was just to the right of this: Music City Center. 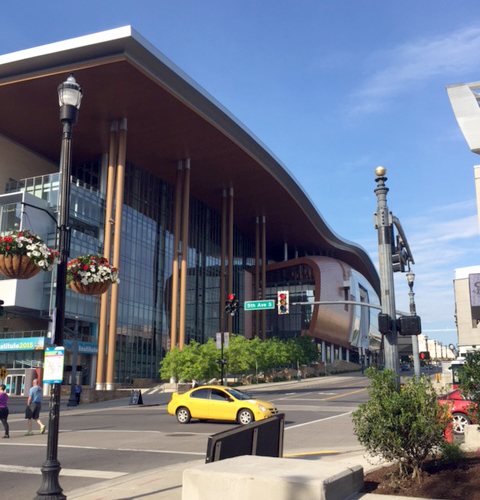 I cannot express to you enough how beautiful and enormous this building is! It's only been there for two years and you can't tell here, but the roof curves a couple of times and is supposed to imitate the shape of an acoustic guitar as you look down the street. Pretty awesome!

I ended up inadvertently finding the Nashville convention center while walking around and it is extremely dated and dinky by comparison, so I can see why they chose to hold the conference here.

I had a few other pictures, but nothing all that great. Like I said, it's hard to get to see everything on these trips.

One of my other issues is also that I always feel very awkward and touristy walking around by myself taking pictures. Maybe someday I'll be less self-conscious, but it hasn't happened yet. Lol! Oh, and also I was dripping sweat by the end of my outing, so there's that too.

Anyway, my next likely trip will be to New Orleans -- woohoo!!! So I will do my darndest to get some cool pictures from there! (Even though it will be August and still terrible weather.) Jazz! Seafood! Gulf coast! Let's do this.