Sorry this is going up a couple days later than usual. I've taken the past week off work and have been enjoying being a tad lazy and just doing fun stuff. (Meaning, I haven't been on the computer much.)

But without further ado, here's your next book! 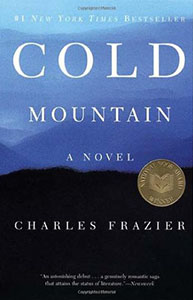 Synopsis: Based on local history & family stories passed down by Frazier’s great-great-grandfather, Cold Mountain is the tale of a wounded Confederate soldier, Inman, who walks away from the ravages of the war & back home to his prewar sweetheart, Ada. His odyssey thru the devastated landscape of the soon-to-be-defeated South interweaves with Ada’s struggle to revive her father’s farm, with the help of an intrepid young drifter named Ruby. As their long-separated lives begin to converge at the close of the war, Inman & Ada confront the vastly transformed world they’ve been delivered.