I can't explain why, but this summer has been extremely busy. Have you found that to be true for you too? Just so much yard work, birthdays, holidays, work/work trips, cleaning and so on. This week especially, it's really hit both Adam and me that our lives are chaotic. It's kind of stressful.

So I'm glad we found time on Saturday to do a few nice things for ourselves. Mainly, since I can never focus on which house project I want to do next, we decided to work on only one room at a time, so that we can actually get something done. And what room do we spend the most time in day in and day out? Our home office, of course!

Now, if I were a smarter blogger, I would have taken before and after pictures, and I would probably also have the patience to complete a project before writing about it. But I'm not and I don't! Lol.

To be fair, I don't blog for a living, so it's always an afterthought, "Oh, hey! I could probably share some of what we did this weekend. That would be a good idea. Shoot! I didn't take 'before' photos. Oh well." That's basically my thought process. But I guess that's good. I'm not living for the Internet.

Also, I'm just not patient enough to finish it first. So what you get are pictures of the middle phase.

However, I did at least take the time to create two rough layouts of where the major items were and where they are now, to give you better perspective. 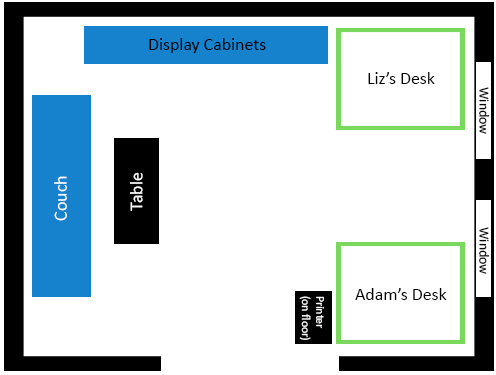 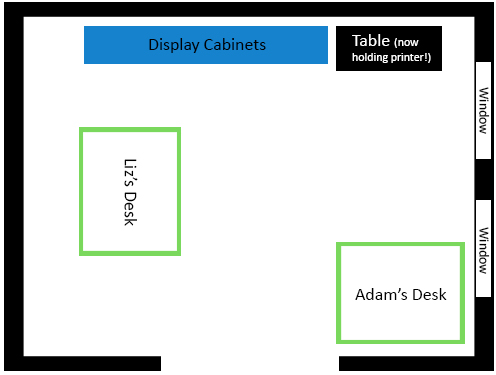 So now, instead of facing opposite walls, Adam has his own nook and I'm facing the middle of the room. The main advantage to this is that now I intend to hang some kind of organizer board behind me as well as shelves, so it should be easier to give the room a bit of design. It's a pretty blank slate right now.

We took the couch out. It's temporarily part of our living room set, but we'll be giving it a new home with either Adam's mom or Thomas probably. It was my couch when I lived on my own and it just doesn't fit in anymore.

Here are some photos... 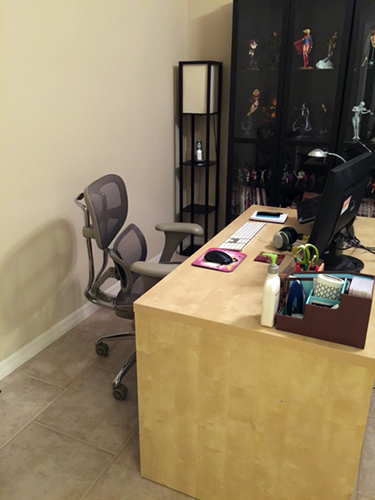 Left angle view of desk (with my handy dandy shredder): 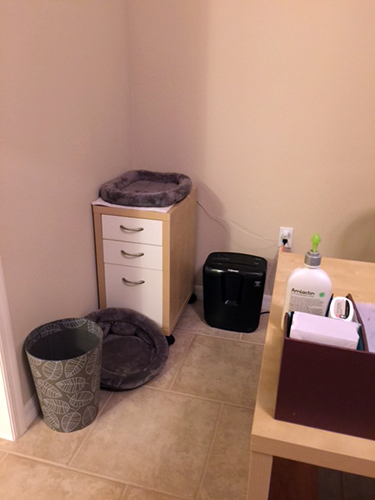 Also, I eventually want to replace my desk. It's totally serviceable, so there's no rush. I've had it for almost ... 9 years now? It's from Ikea. The great thing about it is that it weighs about 5 pounds (I'm not even sure that's an exaggeration), so it's easy to move when we need to. I could probably move it myself if it wasn't so unwieldy -- it's that light!

Of course, the bad thing about it is that it weighs 5 pounds, which means it's basically made of cardboard, paper and spit. So while there's nothing wrong with it and it's a great size, I'd like to end up with something a little more stylish. Plus, I have this idea that after I paint the wall behind my desk and get a cute rug to put under the area, I'll want to be able to see through the sides of the desk to enjoy more of a view of the design elements, which means 4 legs instead of paneled sides. But anyway, I digress.

What was I saying? Oh yes, I was getting to this point: Since the desk is not facing a wall anymore, the problem becomes, "What do you do with all the cords?" So, since I don't really care about my desk in terms of how it looks (in case we screwed up), I gave Adam the go-ahead to drill a hole in it. He then super glued this lovely plastic ring into it and voila! No cords running down the middle of the floor. 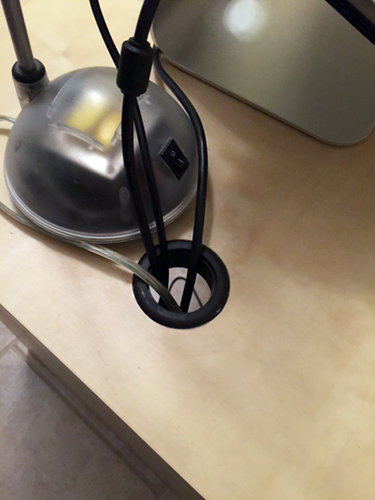 Also, while we were re-situating the layout of the room, we finally bought a new printer! It's a B&W laserjet with scanning capability, so now everything prints really fast and at long last I can print & scan from my work laptop!! (Long story.) Plus, we were able to get it off the floor by the doorway because Adam no longer has to have it connected by hardwire to his computer. Ta-da!

A view of our temporary printer area (we'd eventually like to create something else here ... maybe a printer/sitting area? I don't know. It'll probably stay this way for the time being ... and thanks to Molly for the photobomb): 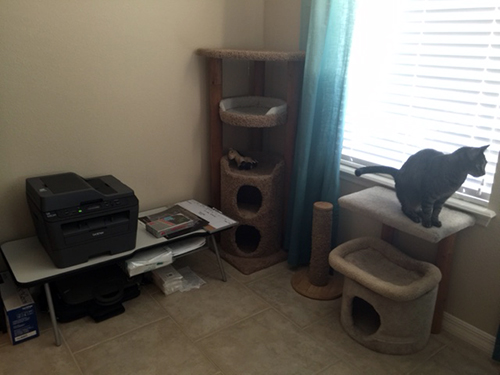 Okay, I'll wrap this up. It may not be as interesting to you as it is to me. But I just have to say before I go that we finally hung our first picture in the house! It was literally almost 15 months to the day since we moved in. So we may not be fast, but at least we're ... deliberate? 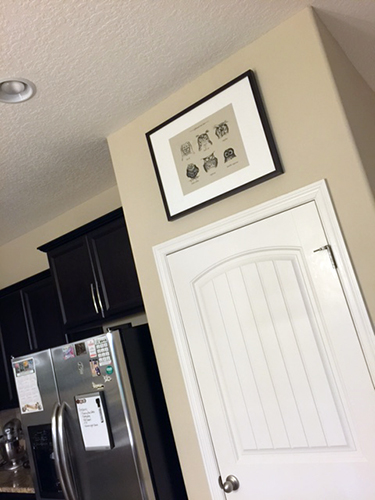 And in case you haven't had the opportunity to see this picture in person, here's what it looks like. Yay!