This past Saturday, Adam and I made our way to the 10th Annual Fall Owl Fest at a raptor rehab place just a couple miles down the street from our house. Apparently we missed seeing signs for this last event year because pretty much any time you combine animals with nice weather with free, I'm in!

I did know the Avian Reconditioning Center was there because I drive past it all the time. I was just never sure when/if the public was welcome ... until now!

The Avian Reconditioning Center takes in wounded birds, whether that means they've received an injury that prevents release back into the wild, they fell out of the nest as a baby and aren't quite right in the head or someone took them in as a baby and they just don't know how to survive away from humans. They do it all. I do believe they also take in birds that can be rehabilitated and released, but it's nice to know that they'll keep birds for life, if necessary.

And that includes one of the most majestic birds of prey: the bald eagle. 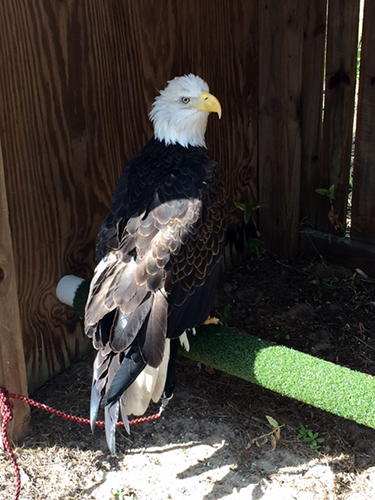 I cannot express to you enough how large these birds are. The two bald eagles they have here are, by far, the largest-sized raptors on the property, at least by double. This guy could definitely pick up one of my cats and fly off with them. And yet it's crazy how light they are. Even the medium-sized owls there are only 3-4 pounds.

Next up, the owl I find to be one of the most beautiful: the European Barn Owl. Doesn't he just look so clean and wintry? 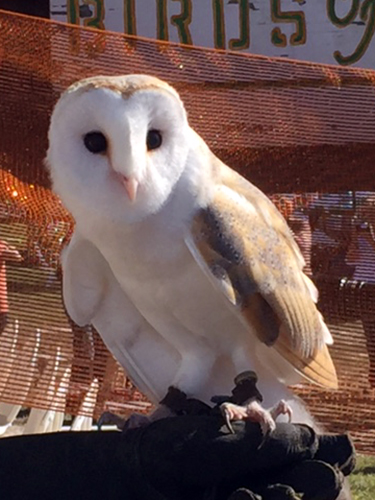 His cousin, the American Barn Owl, looks ... as Adam puts it ... like an old man. Lol. He was definitely napping while I grabbed this picture, so you can't see his eyes, but look at those speckled legs! 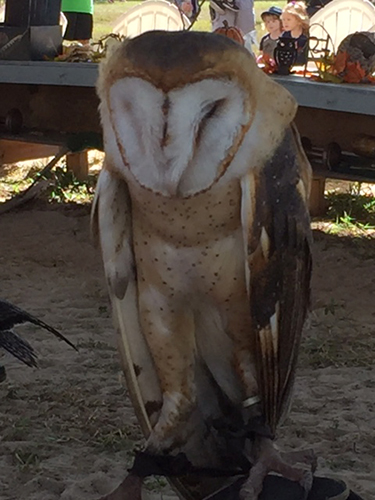 Next up, we have the one I consider to be the cutest owl. I told Jasper she has a run for her money in terms of giant, dark eyes that cute their way into your soul ... a barred owl... 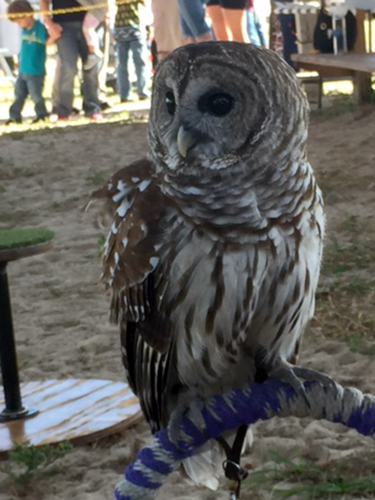 Look at that round head! Those big eyes! I love it. 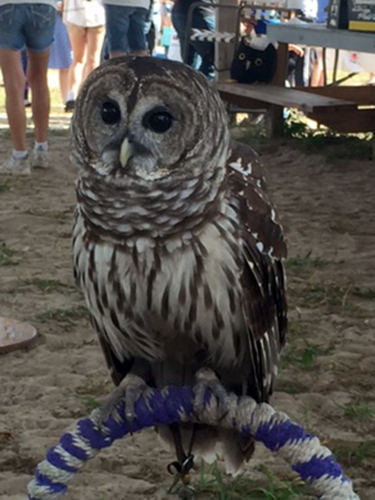 And of course, they had everybody's favorite book-pusher, the Great Horned Owl. 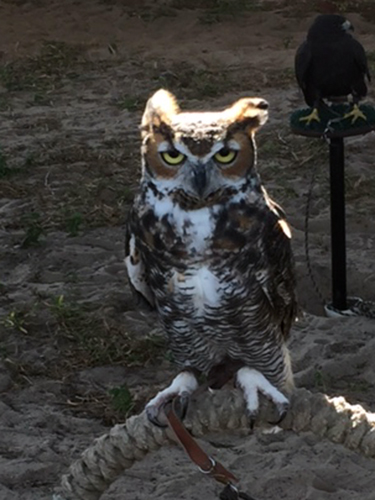 Doesn't he just look so displeased with everyone? Lol. So awesome. Also, while I'm thinking of it, I thought it was interesting that even experts can't always tell if a bird is male or female. They sort of wait to see if they lay an egg. Crazy, right?! They did tell us the sexes and names of all of these birds, but I'll be darned if I remember even one of them. 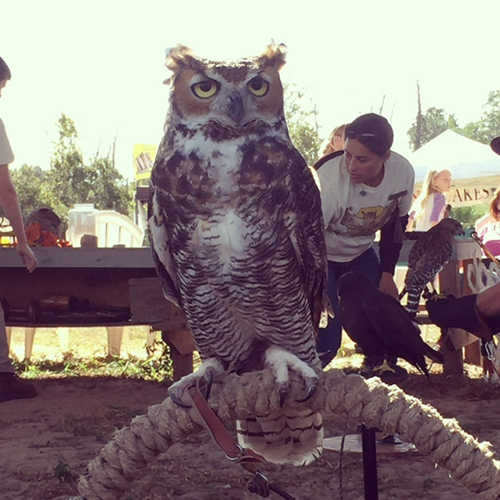 Then we have a red-tailed hawk and let me tell you, we have these birds all over the place by our house. I think they particularly like the nature preserve across the street from us. I've been outside when a few of them are circling around screaming at each other (spring, maybe? for mating purposes?). And just a couple days ago, I wandered out in the morning and one was sitting on the basketball hoop in the park!

You can't see his tail here, of course, but when they're flying, it's the easiest way to identify them because it just lights up coppery in the sun. 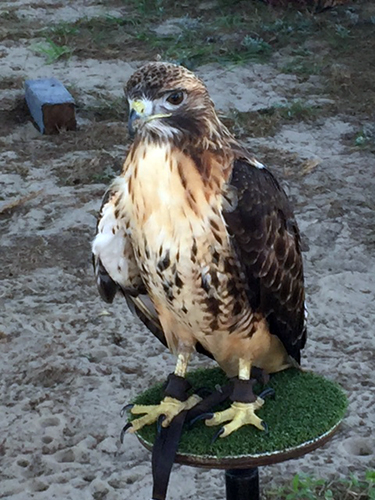 Now, the next one was one of our favorites. He seemed to have tons of personality and was the one bird there that actually talked ... which he did constantly! In fact, the second picture below is my favorite one of him because it's how he looked 50% of the time. (Oh, I guess I should say that he's a red-shouldered hawk ... which I'd actually never heard of, but apparently they're also all over this area too. I guess I'll keep an ear out for their distinctive cry.) 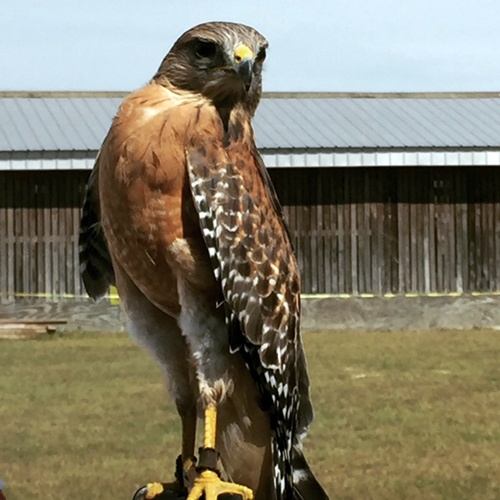 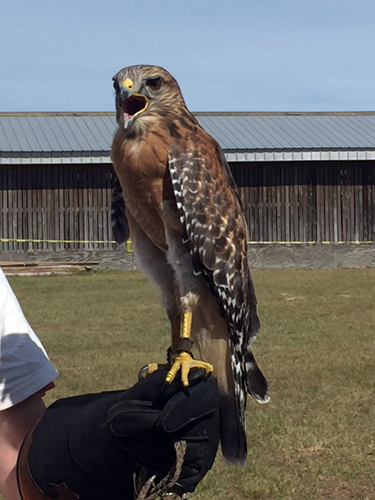 Just a handful more now, if I haven't lost you. Hopefully you like birds too! This one below is a Peregrine Falcon and we actually got to see them fly him. He has a tracker on his back in case he flies off (which has happened before).

They released him and used a lure to get him to circle and dive at it a few times before the owner let him have his reward. Those birds are FAST! They can go over a hundred miles an hour and apparently, just for funsies, someone somewhere tested one once where they took him up in a plane to a height he wouldn't normally fly to and had him dive. He hit over 200 mph! 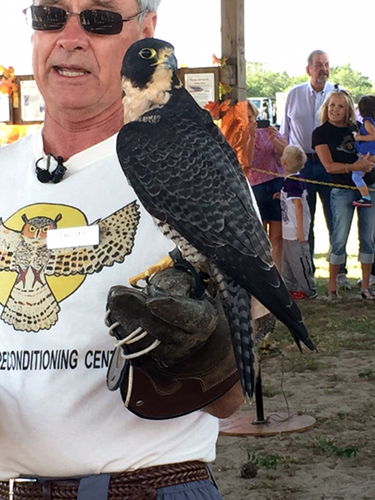 The last hawk I have for you is a short-tailed hawk, which is pretty much true to its name. 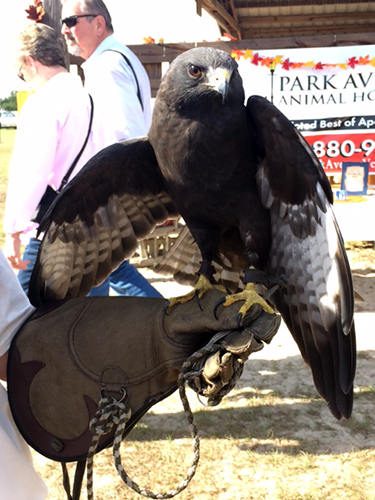 Next up, two kites. The first one is from South America and is a swallow-tailed kite. If you look down, you can kind of see his forked black tail. I see a lot of these guys. Bit of a rounded-headed/bodied bird than the hawks. 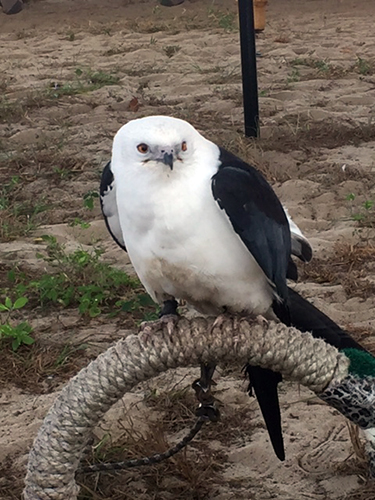 The other one is a Mississippi kite and he was leeeeetle. Pretty much pigeon-sized. So cute! 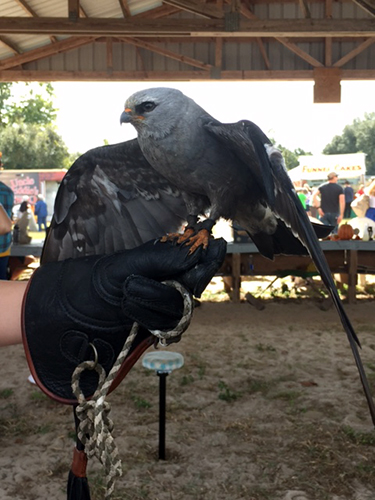 And I'll leave you with one other teensy raptor: an American Kestrel. 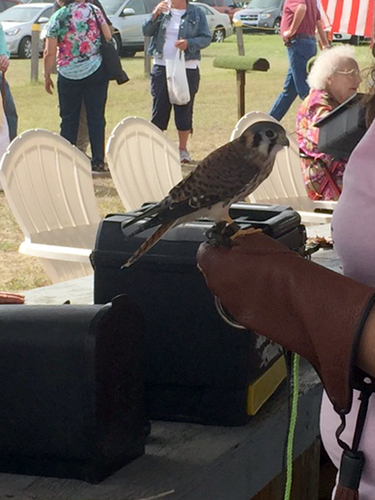 And that's it! Hope you liked seeing some of these cute and majestic birds. Also, if you didn't click it yet, I linked to the rehab center near the top of this post. If you're interested, they have some professional images of a few of these guys on their website too.

Now I just have to decide when I can go volunteer!