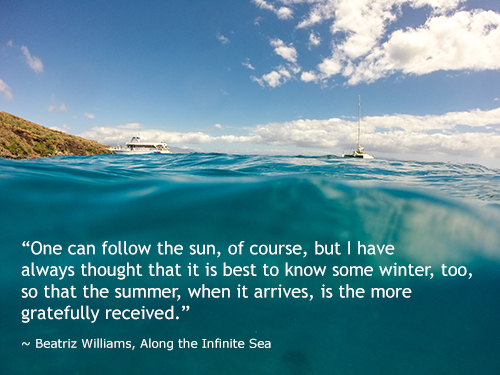 Oh my goodness! I barely finished this month's book in time. Initially, I just took too long finishing a personal book at the end of May that bled over into this month, but then I was trying to borrow a digital version of Along the Infinite Sea so I didn't have to buy it and I had to wait for a "copy" to become available, so I started another personal book. Of course, halfway into my own book, the club book became available, but I didn't want to read both at the same time ... conundrums!

Haha! So, anyway, I pushed through and just finished it in time to get a review post up at about the customary one-week-before-the-end-of-the-month mark. Whew!

Hopefully you all have had a chance to finish it as well, but if not, you have a few days longer than I do before the end of the month gets here.

So, what did I think of this book? Hmm ... having just finished the last page minutes ago, I haven't really digested it entirely, but I did enjoy it overall.

It was definitely a romantic story, though perhaps not one I can relate to on a personal level. It was most certainly a portrait of how messy life can be and of course the time and setting added to the struggles of the characters. I do like how no one ended up truly a villain, which is often how life is: circumstances that sometimes fall into gray areas.

Or perhaps, as I see being the case with Johann, we do things that are wrong, but then we finally come to realize we've been wrong and work hard to redeem ourselves. He was someone I could relate to. Someone who had a difficult time in life with his wife dying young ... a man who wanted to do the right thing, but perhaps out of fear or a sense of duty, took longer that he might have wished to realize he needed to make a drastic change in his behavior.

I'm not sure how I felt about Annabelle. She drew me in as someone interesting to watch and she was very decisive and strong-willed, and clearly wanted to do what was right. She was also dealt a series of unfortunate circumstances and tried to make the best of them, so I certainly felt for her. But since I don't agree with some of her life choices, I also didn't closely relate to her as a person. Someone I could be friends with perhaps, but not someone I saw myself in.

And with Stefan, he was a well-crafted romantic interest: handsome, madly in love with Annabelle, beleaguered as a Jew during Hitler's rise to power ... someone who you can feel sorry for, root for and find compelling in the way he was faithful to Annabelle no matter what happened to him.

I was madly curious, right up until the end, about why Stefan and Annabelle had not spent their lives together, especially once we learned that they escaped Germany. It was again a noble decision on his part to stay and try to help his Jewish brothers and sisters instead of going to live the life he'd wanted all along. It makes their final reunion very sweet.

Aside from the main story, though, I also enjoyed reading about Pepper. I realize this is a series and I'm probably missing a larger picture around the Schuyler sisters, but I found her entertainingly acidic and sassy, while still being a nice person. She was a good foil to throw into the mix, but perhaps I'm missing why her part of the story was included at all (which is obviously not to say that I didn't like it). I just mean that Annabelle's story could have been told without it. But I believe the series is about the Schuylers, so perhaps I'm missing the tie-in.

At any rate, aside from the copious, copious sex scenes (which, look, I get it and sex is a part of life, but my goodness people! Did they do anything but...?), I found the story terribly romantic and tragic and ultimately satisfying. It was wrapped up more neatly than perhaps feels realistic, considering that both Johann and Stefan get Annabelle in the end, but it was still happy, so I didn't really mind.

I thought it was definitely a quick and good summer type of read! What were your thoughts on this one?