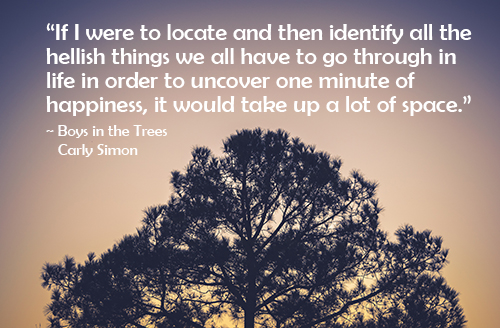 Another month, another book! Apologies for getting this up late. Things have been pretty busy lately and I just didn't find the mental energy to put this together until now.

I hope everyone had a pleasant October! Happy belated Halloween!

So, I didn't know what to think going into this book. The amount of information I could have given you about Carly Simon wouldn't have been enough for you to identify her by. I didn't even remember she was the one who sings "You're So Vain."

I had no idea her father was the Simon in Simon & Schuster. I had no idea they knew so many famous people, from inventors to athletes to artists ... it sounds like a crazy childhood!

It makes me wonder a little less about her seeming inability to figure out what she wanted from men.

Yet, even though I can't relate to much at all about her life, I really enjoyed her writing style. I sometimes saved random selections of text (since I'm reading on a Kindle) just because I liked the way she explained something. For example:

"My nose wasn't the only way I disappointed him. After two daughters, he'd been counting on a son, a male successor to be named Carl. When I was born, he and Mommy simply added a y to the word, like an accusing chromosome: Carly."

The writing is sheer brilliance. And not just for the sake of being fancy. You can feel the way she bore the guilt and anger of not being who and what she felt her father wanted or expected. What a burden!

Another key point that stuck out to me was her stutter. For whatever reason she developed it, it's amazing that in singing, it just went away. What a freedom that must have felt. And how many performers nowadays are afraid to go on stage? It feels like the vast majority of what we get now are people who just want to be seen and known. I feel like there used to be more people who simply had something of value to say and the people who knew it forced them to say it so people could hear.

Or maybe I'm just feeling poetic and nostalgic. (Not that I was alive back then, but still! I grew up listening to a lot of 60s music, so I understand the vibe.)

Anyway, I want to thank you, mom, for suggesting this book. I had zero expectations and a little uncertainty going in, but I discovered what I often do with memoirs ... every life is interesting and has purpose. And each person has private things that you just don't know about them, even if they're famous, until they choose to share.

I felt like I got to sit and listen to a famous musician share their story and it was worth hearing. What did you all think?