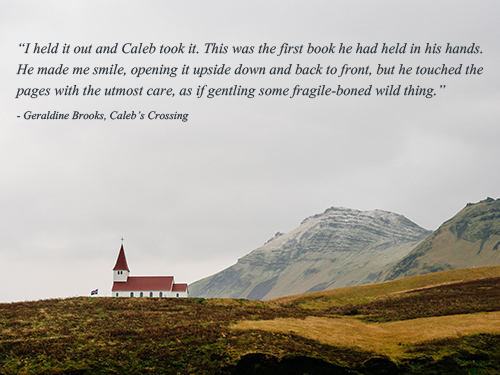 Wow, I know I keep making statements like this, but I just can't believe we're wrapping up two years of this book club already!

Also, I don't quite know how, but I finished Caleb's Crossing in 3 days! Chalk it up to calmer work days as the year winds down, I guess. Definitely left me with more energy than usual. Plus, maybe I'll admit that I was also motivated to read one or two other books between now and January. Anyway, I'm posting this one a little early in case you want to get to it before the craziness of the Christmas holiday. But be warned, there are SPOILERS if you haven't finished it.

So, my thoughts on the book.

I enjoyed it overall. I didn't know about Caleb & Joel in a historical sense, that these were the first two Native Americans to have attended Harvard.

(Although, you should never rely on my knowledge of anything historical, as I both A) have a terrible memory and B) couldn't have told you that Harvard even existed in the 1600s. So there's that.)

The first thing I have to admit is that the writing style was a little distracting for me. I can't necessarily fault the writer for using words and phrases that were probably common in the English language at that time. But since I'm so unfamiliar with this version of English (as compared to, say, the way they spoke in the Victorian Era, which I'm really familiar with since I read a lot of books from that time), it felt forced, even though perhaps it wasn't.

Does that makes sense?

I'm basically saying that the author may have gotten it totally right, for all I know, but that it was a little awkward for me, as a reader.

Anyway, I did find myself drawn into certain parts of the story, such as when young Bethia was learning from Caleb -- his language, how to forage, how to walk softly and so on.

I also enjoyed hearing about the way her house was kept, how they farmed and all of that. I like understanding how food was acquired, what having a job looked like at other times in history and things of that nature. Which means I also found her indenture(...ment?) interesting to read about.

Of course, one engaging thread throughout the story was her challenge being a woman in a time when women couldn't go to school, speak in church or make a lot of their own decisions. That frustration was definitely understandable, although of course we have a lot more opportunities as women now.

I did think it was an interesting choice to create a missionary's daughter to be the protagonist of the story, in order to tell about Caleb's life from an outside perspective instead of through him directly.

I suppose, for one thing, it's easier (and more acceptable) to create in-depth detail around an entirely fictional person rather than to make up more than necessary about a person who actually lived. I appreciated that decision.

1. The name "Makepeace" totally confused me for the first 50 pages or so. I couldn't decide for sure if he was an adopted Native American or a flesh and blood caucasian brother to Bethia. It makes me wonder if names like this were common at that time. And to be honest, I actually found more than one name distracting (including the name of Bethia & Samuel's son later on).

2. I wonder why the author never developed the romantic interest between Bethia and Caleb any further. Let me preface that statement by saying that I think Bethia ended up marrying who I would have expected her to, had she really existed. I didn't expect her to marry Caleb, given the time period. However, each seemed interested in the other beyond friendship and Bethia finally realizes this for herself, but as soon as that realization occurs, we jump ahead to her as an old, dying woman who married Samuel decades before. It was a bit jarring for me. Did any of you have the same experience? (Adding to that, we didn't get to see her relationship grow with Samuel to a satisfying extent, although I understand she wasn't the reason this book was written. But I'm just saying, if Caleb was interested in her, it would've seemed natural to find out his reaction when Bethia became engaged to someone else. Just saying.)

Still, I did appreciate the honest portrayal of Bethia's doubts and struggles in her faith. The way Caleb's ideas and questions would sometimes throw her and she would seek out how to answer him next time they met. That felt realistic.

I also have to admit that I cried when Joel and then Caleb died at the end.

The more so because those aspects of the story are actually true. To think that, whatever their lives actually did consist of (outside of this fictional rendering), they were obviously smart young men with ambition. To find out that one did not even live to receive his diploma and the other died too soon after graduating to make use of all that he learned is incredibly crushing.

I can see why the author was inspired to write about them.

Okay, well, I guess I really didn't pull a lot of quotes from this one to share and I'm not sure what questions I want to ask specifically, so hopefully you all can just provide feedback on my thoughts and let me know what parts stood out to you in the comments.

And in case I don't get another opportunity to say it: Merry Christmas and Happy New Year to each of you!