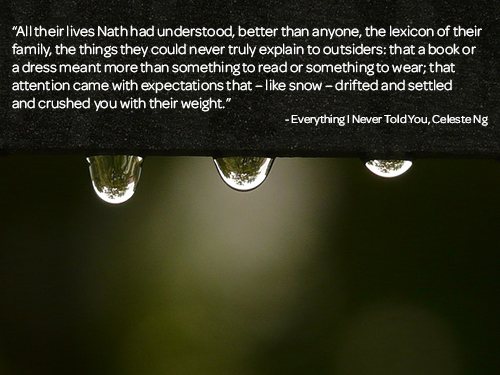 Purple Fig Club: Everything I Never Told You

In light of all the bad things going on in the world, sometimes it's most enjoyable to get lost in a good book for a few hours. And this book was definitely an interesting exploration of human relationships, among other things.

I was so excited to read it because I was already planning to and then my mom picked it for one of her books. Score!

It’s fascinating (and maybe a little scary) to consider how much parents shape their children’s lives. The way they treat them, the things they teach, the path they recommend, the freedom they allow,. The way their own experiences color their expectations for their kids.

Truly, it seems that family can be one of the hardest things. The terrible things you say to each other. The times you ignore each other because you get wrapped up in your own stuff. The impossible expectations you sometimes have for each other.

I loved this quote, which, if I'm remembering correctly, comes from the brain of Nath:

You could stop taking their phone calls, tear up their letters, pretend they'd never existed. Start over as a new person with a new life. Just a problem of geography, he thought, with the confidence of someone who had never yet tried to free himself of family.

At first, I assumed the title of the book applied solely to Lydia because she was the one who had died. But I slowly realized, although I didn’t state it to myself outright until the last few pages of the book, that it applies to everyone in the story.

James and Marilyn made a conscious decision never to dive into their pasts with each other, and it ended up dividing them because they lacked insight into each other’s struggles.

James worried he would forever be ostracized for looking foreign.

Marilyn felt she would never break free of her societal limitations because she was a woman.

Nath couldn’t talk to his family about what he really wanted because they had trouble accepting him for who he was.

Hannah got lost in the mix and never got to really talk to anyone about anything until Lydia was gone and made a space for her. (Although it's interesting to note that Hannah was also the most observant and insightful person in the family.)

And, of course, Lydia, who transformed herself into "the perfect daughter" as a defense mechanism so that her mother wouldn't leave again, even if that meant never been honest with her.

One of the most heartbreaking moments for me was when Marilyn started going through Lydia's things after they knew she had died and slowly figured out that Lydia had never truly had a passion for science, but was showing interest to make her mother happy.

Lydia, five years old, standing on tiptoe to watch vinegar and baking soda foam in the sink. Lydia tugging a heavy book from the shelf, saying, Show me again, show me another. Lydia, touching the stethoscope, ever so gently, to her mother's heart. Tears blur Marilyn's sight. It had not been science that Lydia loved.

Ugh, that was so tough to read! It's beautiful in the sense that Marilyn realized how much her daughter loved her, but also wrenching in the discovery that she had been pushing her own agenda on Lydia, just as her mother had done to her.

We seem doomed at times to repeat the mistakes we swore not to, even if we have the best of intentions.

Possibly the saddest aspect of this story was the revelation that Lydia may not have truly meant to end her own life. She seemed to be making an important decision to take control and be the person she wanted to be, but never made it out of the lake. It was a little unclear to me during this part if we were supposed to understand that her death was an accident after all.

But in general, losing a child, a sibling ... truly, any family member, is devastating.

What made something precious? Losing it and finding it. All those times he'd pretended to lose her. He sinks down on the carpet, dizzy with loss.

And possibly the hardest thing that people struggle with after losing a loved one -- the knowledge that all future experiences and special moments cannot be shared with the one who is gone. I believe this revelation comes from Nath:

So much will happen, he thinks, that I would want to tell you.

1. Each character in the book was dealing with internal struggles, which occasionally caused them to lash out at each other. Do you think more harm was done by the harsh things they said to each other or the things they never talked about?

2. How does James' and Marilyn's obvious favoritism toward Lydia affect all three children?

3. What do you think is the purpose of the author in having Lydia make a resolution to change her relationship with her parents and then drown before she's able to do anything about it? Do you think that, if she'd made it out, she would have been able to change things?