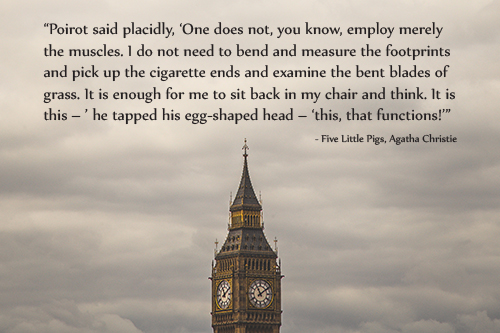 As I mentioned earlier this month, I recently finished reading It by Stephen King. I must say, coming off of that tome (1,100-1,400 pages depending on which edition you pick up), it was a delight to breeze through this 200-some page mystery by Agatha Christie.

I am not ashamed to admit is the first book of hers that I've read, although now that I've finished it, I'm not sure why it took me so long to try one. It was absolutely delightful. Easy enough to read, with subtle hints at the solution, and that wonderful air of British politeness that always makes me feel so cheery. I'm not alone in that, right? Anytime I read something English, I hear the accents in my head and feel like I must be a genius among geniuses.

Also, there's this board game that Adam and I have been playing off and on with Andee and her husband. I can't remember if I've mentioned it here before. It's called Sherlock Holmes: Consulting Detective and it's basically a set of 10 cases you can try to solve (so, limited play, but so much fun!). They give you a map of London, newspapers from the dates of the various cases, a phone directory and the like so you can try to figure out what happened by conducting your own investigation.

Reading this book in places made me feel like I was working on one of those cases, so I actually had lots of fun trying to keep track of everything and mull over whodunit!

Fun fact: The murder that this book centers on takes place in September -- so good on us placing it in this month! Funny coincidence.

The only thing I struggled over a bit was pronunciation. I know he's a famous character, but Hercule Poirot is not a name for the faint of heart. Herkyool? Herkyoolee? And also, Amyas. Amyass? Aymeas? Ahmaias? I hate it when I'm reading a book and in my head I get hung up every time something pops up that I'm not sure how to say.

But that's not a serious critique of the book, just an aside.

I was worried at first that I wouldn't be able to keep all of the characters straight, but I found that a few things helped:

2. The chapters went from one person to the next in the same order each time. (Agatha Christie comes across almost obsessively orderly in her writing style, doesn't she? Not that I mind. A woman after my own heart.)

3. Each person had such a distinct personality, I caught on pretty quickly.

The most important question: Did you guess who the culprit was?

I mulled it over here and there as new evidence came to light. I guessed at Phillip Blake's interest in Caroline Crale before they spelled it out for us. I felt pretty sure we'd find Caroline innocent in the end, otherwise there wouldn't be much point to the book. I never really suspected the governess, the younger sister or Phillip.

Meredith held my interest at one point, though I would never have guessed he was interested in Elsa! That came out of left field for me.

In the end, I did suspect Elsa, even though she was supposedly in love with him because she's emotional and vindictive. I never entirely sussed out why she would have done it, but I was close.

Very entertaining! I love a book with interesting characters that is a breeze to read but forces me to use critical thinking.

Beyond that, I don't really have much else to dive into. How did you all fare in this mystery book?