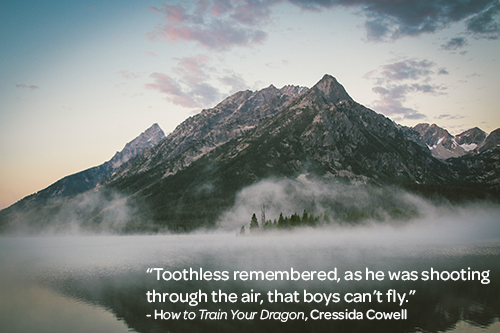 Purple Fig Club: How to Train Your Dragon

Purple Fig Ladies, do you realize we're about to close Year 3 of this book club?! I don't know if I've ever kept any personal projects going this long. I guess that's the power of reading and the awesomeness of all of us! Right? (I mean, what else could it be?)

Anyway, hopefully everyone had a chance to read this month's book. It was certainly a fast read, which I guess was your reprieve leading up to Outlander. Mwahahahahaha! Actually, I don't know why I'm laughing maniacally. It was Andee's pick.

Question 1: Is everyone clear on how to train your dragon?

Answer: It's pretty much the same way I train my cats, really, and just about as effective. (I feel like Cressida Cowell is definitely a cat owner. Just based on my own power of deduction.)

So, the book was really adorable. I didn't pull quotes from it specifically, but I loved the artwork. Clearly it's a children's book, and moreso than I expected, but I find it fun to take a break from critical thinking once in a while and just have fun, so I really didn't mind. The concept of child Vikings learning to train their pet dragons is actually pretty cute.

I have to admit, I found myself wondering when Hiccup's dragon Toothless would suddenly turn awesome. Like maybe he would end up growing at an exponential rate or breathe high-speed fireballs or turn invisible or something. By the end, the awesome thing he ended up doing was saving his master's life. So ... the joke's on me and my cold, cold heart looking for superficial awesomeness.

For shame, Liz. You're no better than Snotface Snotlout.

Seriously though, I thought the story dealt with important concepts for kids like bullies, family, adversity, self-worth and, most obviously, the flaw in books that consist of only one sentence.

Another thing I liked was that all of the different dragon qualities ended up having value in getting rid of the Seadragonus Giganticus Maximus. They needed Fireworm to taunt him (her best skills seemed to be obnoxiousness). They needed the more physical ones to help bomb the dragons with feathers. And they needed Toothless to behave very un-dragon-ly and perform a selfless act of heroism.

Same idea with Hiccup being able to speak Dragonese even though it was considered lame. He followed his interests and they ended up being very valuable to the rest of his community.

All in all, I had fun reading it and hopefully you all did too. Let me know in the comments!