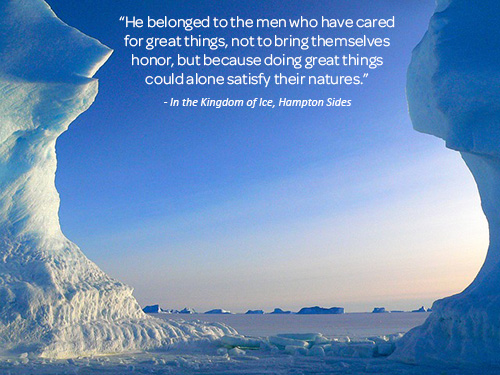 Purple Fig Club: In the Kingdom of Ice

Wow. I truly don't know where to begin with this book. The story was so incredible that I kept stopping to question whether I was correct in thinking it was a true story or if I had gotten confused and it was just a tale out of someone's fantastic imagination.

This book is anincredible historical event that I think most of us probably were never taught about. The prologue alone had me agog!

I was initially concerned about getting through the whole thing in time because of the length, but I shouldn't have worried. I finished it in under two weeks because I couldn't put it down.

From the beginning, I was captured by the numerous scientific theories surrounding the makeup of the Arctic, the eccentric newspaper editor's antics and the interweaving of other historical highlights -- mainly the Centennial Exhibition. Edison! Bell! Grant! History is so much more captivating to me when the pieces are all twined together, so I can see how these famous people interacted.

Hearing about the books that were inspired by the world's fervor over exploring the North Pole was also very interesting (Frankenstein, Journey to the Center of the Earth, etc.)

I was incredibly impressed by the author's ability to do all of this research and then write such a cohesive narrative.

It really is hard to mention everything I found compelling about this story because it's so rich in detail!

I have to confess that because the author strung us along until the very end of the book before finally letting us know what happened to Captain George De Long's group (and because of the interspersed letters from Emma making me ever hopeful), it had built up so much inner turmoil in me that I welled up when I found out that they had all died.

After all they had suffered, for them to not make it home is just so crushing.

Though, by the same token, I'm shocked that so many of the men did make it home. Almost two years stuck drifting in the ice, illnesses, personal tensions, the boat sinking, dragging their equipment across the ice, boating in teams to Siberia through a storm, struggling to trek to safety ... it's just an absolutely unbelievable story.

This quote, for me, was a great description of what so much time without sun would do to a person:

"The sun-starved crew relished this strenuous, mostly outdoor work, for during the long winter everyone had become "bleached to an unnatural pallor," said Melville, "like vegetables grown in the dark."

I'm not sure how anyone survived what they went through. It's one thing to hear about being stuck on a boat in the Arctic with 32 other people for almost two year -- it's entirely another to actually do it. Can you imagine how long a year must seem under those circumstances?

I found the German Nindemann's story particularly fascinating. Having survived one boat sinking, then living on an ice floe for 7 months after the Polaris grounded itself, to this fateful trip on the Jeanette. I don't know if the man was lucky or unlucky. And then later finding out that he outlived both his wife and son. Just incredible.

By the end, I found myself wanting to read George Melville's and Emma De Long's books as well.

At any rate, the level of detail included here, thanks to various journals, letters and newspapers really made the story come alive. Truly a major historical event that, whether you consider it a success or failure, is doubtless an adventure full of people worth remembering.

However, I do have one question. Did I miss it or did the author never directly state that Chipp's group on the whaleboat had died?

I mean, obviously that's what happened. But all I remember from the book is the map showing that the third boat never made it to land and the line where Melville stated that he intended to find out what happened to Chipp and his men, but I cannot remember reading that at some point he figured out that they must not have made it.

Is that the case? I kept waiting for that to be confirmed and feel like it wasn't, other than by logical assumption.

Regardless, I absolutely loved this book, despite the mixed emotions I felt at the end and I'm so thankful it made it on this year's book list. Thank you, Sarah Beth!

I don't have any discussion questions, so just let me know your thoughts and what parts stood out to you. I could seriously talk about this book for days!!