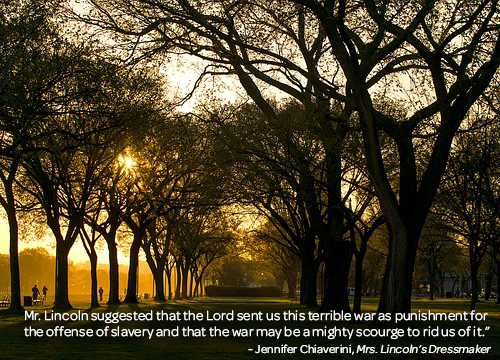 Another book, another great character named Elizabeth! Lol. And also, another book I probably wouldn't have discovered myself, but ended up enjoying immensely.

My goal to read 25 books this year continues apace! And that doesn't even count the fact that I'm re-reading the Mistborn trilogy aloud to Adam whenever we drive places. I figured I wouldn't count books that weren't entirely new to me, or comic books for that matter, otherwise my page count would be RIDICULOUS.

Technically, I didn't even fit our January book into my total for this year because I read it in December. I'm nothing, if not honest in my book reports.

It's hard to tell, with historical fiction, exactly how much of the story is based on corroborated facts and how much is embellished, so all I can is comment on the story itself. It does, as my mom brought up when I was in Miami a couple weeks ago, provide motivation to go read the original book by Mrs. Keckley and possibly also a biography on Mrs. Lincoln.

Assuming the majority of the conversations are based on historical facts and possibly a sense of Elizabeth's voice from her own book, I have many thoughts.

Firstly, that Elizabeth's story is an incredible one. A former slave who freed herself and her son, survived the death of her only child, built and ran her own business, and conversed with many of the prominent political figures of the Civil War time period, including one of the most well-known American presidents, is quite a life!

Hearing about the war, the Emancipation Proclamation and subsequent lingering prejudices from the perspective of a black woman was tough, but accurate. I felt that the author did well considering the likely opinions that a woman like Elizabeth would have at various junctures, such as the mention of Tad being encouraged in his education after displaying disinterest, while a young black boy might never be given such attention.

Secondly, I was overwhelmed with the amount of loss Mrs. Lincoln experienced over the course of her lifetime. I can't even remember how many of her close relatives died in the war, beyond which, I can't imagine not being able to publicly mourn them simply because they had not sided with the Union.

Then, the loss of almost her entire immediate family one after another -- three sons and her husband. It is no great shock that she emotionally spiraled the way she did.

While she seemed opinionated, vocal and occasionally inappropriate, I just couldn't help feeling sorry for her. Of course, she did create some of her own problems, but it's hard to refute the fact that she suffered much and was not treated properly for a wife of a martyred president.

On a lighter note, some of the anecdotes about President Lincoln were highly entertaining. One of my favorite excerpts:

“Tad continued to improve, but two days later, Mr. Lincoln returned from Gettysburg with a fever, which soon turned into varioloid, a mild form of smallpox. He was quarantined in the White House for three weeks, but Mrs. Lincoln confided to Elizabeth that he was rather cheerful about it. Since he had been president, he had noted, people had been crowding about him, always asking him for something. ‘Now let the office-seekers come,’ he joked weakly from his sickbed, ‘for at last I have something I can give all of them.’”

It is unfortunate, however, that Elizabeth's book was received with such vitriol. It's hard to understand how anyone who actually read it could think that it was simply an attempt to gossip in return for a bit of personal fame. Which leads me to believe that a good number of her accusers did not read it in its entirety and many others were simply prejudiced against the idea of someone of her race sounding intelligent.

I'm grateful that we have the opportunity today to learn about her life and judge for ourselves.

Did you all enjoy the book? What parts stood out to you?