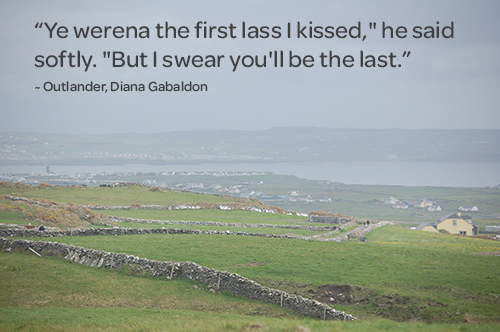 I was about to start typing my usual, "Can you believe we're up to the last book of the year already..."? when I suddenly had this panic of, "Oh no! I never posted the December book reminder! ... or did I?" So I had to go and check and thankfully I had. Whew! Bad memory. Still, though, I can't believe we really are talking about the December book already. Though I do definitely feel like I've read a lot this year! In a good way.

Anyway, I know not everyone read this book, but that's true of almost any month, and I will never fail to write a discussion post! So here we go for those who did and/or those who are interested in my thoughts on it.

Oddly enough, I felt sort of torn about Outlander. There were things I really loved about it ...and a few things I didn't. Which I generally hate to admit about a book that someone I love picked, but in an effort to keep things honest, I'll admit it ... this once. (LOL)

From the outset, I wasn't entirely sold on reading a story set in historical Scotland ... and I'm Scottish! I was worried that it would be dry and tedious in places, but honestly, I'm happy to say that I was wrong.

Once I started to get a grasp of the characters and places, I realized it wasn't going to be plodding and over-detailed. I will admit I have absolutely no understanding or learning about Scottish history (well, cursory, maybe ... not literally none), but it was easy enough to follow along. And I really liked how the author used Claire to sort of roll my eyes for me when anyone droned on too long about genealogy or some such "boring" topic. Clever.

Another thing I really loved about the book was the adventure of living in a culture/time without all of the technology and medicine and relative safety that we enjoy today. The sword fighting! The leeches! The witch trial! The prison escape!

The thought of living wild and free like that is such a romantic one. Granted, the sane among us realize they also lived shorter lives for a reason! But I'll give the author that she totally understands the call of nature and the beauty of living simply. That was definitely a pull that the setting had for me. Plus, even though I've never been to Scotland, I can picture the gorgeous hills, the fog, the greenery. Very enticing.

Believe it or not, I also found it pretty interesting to read about what certain dried plants can do medicinally (Nerd!) as Claire was learning about them. Haha! I felt like having her be a healer was genius too. Gave her a perfect and natural role to help her acclimate to an otherworldly and jarring experience.

I felt like the relationships between some of the characters were well written. Like having crotchety ol' Murtagh also be loyal and humorous at times was surprising, but enjoyable. (And to this day, I have no idea how you pronounce that name and it makes me CRAZY. I mean, Laoghaire = Leer? My Gaelic must be rusty nonexistent. And also, I have to question using that many letters to make a one-syllable word. Lol. Though it does look pretty.)

I had really only one major gripe with the book: too much sex. Let me explain.

Whether or not I realized this book was primarily a romance (I did not) and whether or not I have a problem with sex (I don't), I just felt like there was too much in general. I totally buy into the need to express the intimacy and natural chemistry of the two protagonists to help you understand what sort of relationship they had. But...

Perhaps in future books, it gets toned down a little since they will have now been together for a little while. Only Andee knows! (And I admit, I was extra sensitive because all I could think was, "My mom is reading this!")

The other problem that the sex brought up for me (should I be typing "sex" so much? This blog entry is going to get a ton of spambot attention! Lol) ... is that some of it was too ... aggressive for my liking. I'll leave it at that.

But I did of course get carried away in the whole "Woman fights off rapists without needing assistance from a man!" as much as I did "Man rushes in to save woman from frenzied mob!" Those aspects of the adventure swept me up, up and away for sure.

All in all, I enjoyed the book, despite my protests. It definitely left me curious about whether there are other time travelers around, about what might happen when they get to Italy, if we'll ever hear from Frank again, whether Claire really does end up having a baby after she thought she couldn't ... lots of things. So, well done, Diana Gabaldon. You left lots of hanging threads that leaving me wondering what sort of sweater they turn into. Or something. Haha.