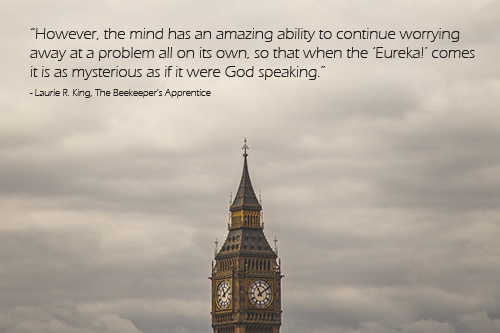 I'm so thrilled to be able to say I made it through yet another year without missing a book or getting behind on my reviews! It's not always easy, but it's great feeling like I accomplished one of my goals for the year.

Another goal I accomplished this year was reading 25 new books! Fortunately, our club books fed 11 of those 25, so the two efforts overlapped a bit. I also read a lot of comic books and at least 4 books that were re-reads (which I didn't count), so all in all, 2015 has been the most reading I've done in a long time!

I don't think I'll increase that goal for next year. I have too many things to get done to be able to read more than I already do, but I think I'll aim for the same goal again. It's 2 books a month, plus one extra. I think I can manage that again.

Speaking of which, please let me know within the next week what your book choices are. That'll help give us a heads up in time for January. But now, on to The Beekeeper's Apprentice...

I probably said this in my reminder post for this month's book, but this book was a present from my friend Adinah who I believe has read this whole series. (Yes, there are more!) This started back in the 90s, I think, and man, I really want to read the rest of them! I was reminded just how good it is!

It's getting too late in the year and I'm too worn out as we head into Christmas to do many pull quotes, but this book has a lot of great lines. I'm impressed by the wit of the author in both writing the dialogue (which really does feel like Sherlock Holmes) and in coming up with mysteries that are captivating, exciting and challenging. I wasn't sure how a different writer would do taking on a beloved and established literary character like Holmes, but again, I think she nailed it.

I also initially wondered how I would like the concept of a teenage girl working hand in hand with the Great Detective, but honestly, Mary Russel is written both like a real person and also as a perfect match for him. Someone quick-witted, but also precocious enough to put him in his place where most other people wouldn't. I actually think the entire concept of this series is brilliant, the more I think about it.

And I like that in the process of giving Sherlock a new, young protege, that the author doesn't throw out or discount the value of Watson and what he brings to people like Sherlock Holmes and Mary Russell, who occasionally, I think, just need a hug and a hot cocoa. Whether they want it or not.

I found each case fun, particularly the early one where Mary was still learning how to work cases and use deductive reasoning in a practical sense. And then the one where she rescues Jessica Simpson, although I found that one to be more suspenseful.

The final and most serious case, wherein they find out the identity of their long-time tormentor, is so well written that I felt the tension, the fatigue, the strain along with the characters as they parsed out how to defeat their enemy. I just love everything about this. It's a great mystery, it's light-hearted but also serious, it develops a complex but heartwarming friendship between two unlikely friends (oh, which reminds me that I loved the places where Sherlock felt more human and actually tries to comfort people in the story) ... all in all, it makes me want to be there with them in old London solving cases.

I hope all of you enjoyed it as much as I did both when I read it last year and again this month when I read it a second time for a refresher. I really felt like this would be one everyone could get into. Let me know in the comments below! (But don't be afraid to criticize anything just because I like the book. I want to hear all honest viewpoints!)

What other parts stood out to you that I forgot or didn't have space to mention?