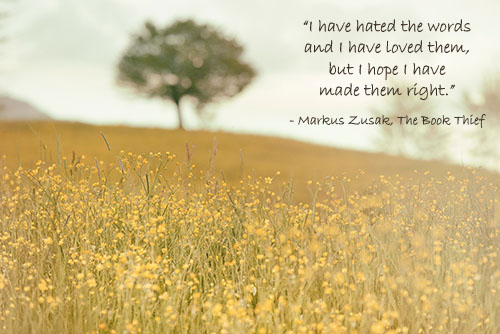 And the year winds down further, which means we have only two books left to read! It's almost that time again to decide if you're up for another year of the book club. I, for one, have been enjoying it, even though it's a lot of work to create all of these blog posts, for many reasons: it keeps me in touch with all of you, it presents me with amazing books I wouldn't normally have read or even known about, and it keeps me reading!

So, feel free to start letting me know if you're in for another year or if it's become too much of a commitment (I have thick skin, so be honest) and then we can move forward from there. But for now, let's talk about another wonderful book (hopefully you thought so too): The Book Thief.

So, once again, I'm going to do my darndest to share some of my thoughts while not stealing anyone's thunder or saying everything there is to be said (although, in the case of this book, I think it would be hard to do). I think I'll discuss by theme.

There are so many interesting characters in this book and not a single one is wasted.

Frau Holtzapfel has a harsh exterior, but really just misses interacting with others while her sons are at war. When Liesel comes to read to her, she comes back to life a little. Ilsa Hermann is a devastated mother who can barely pick herself up after the death of her son and slowly adopts Liesel by letting her come in and steal her books, and in turn she lets Liesel begin to heal her.

Rosa, the adoptive mother who verbally berates everyone, but truly cares for them as well. Hans, the adoptive father, who is kind to a fault and teaches Liesel many valuable lessons. Max, the escaping Jew, who becomes a part of their family and Liesel's older brother -- who paints pictures on the wall and writes stories for her to help her understand who he is and how he sees the world.

Rudy, the best friend who faces struggles of his own but is always there to support Liesel.

This book was so rich in people that I wonder how the author was able to create not just one or two, but countless fascinating people who all had something important to teach us.

And, last thought under this category, the last page of the book leaves us with a perfect statement for how evil and how beautiful people can be, and we get it from the mouth of Death:

"I am haunted by humans."

As with many things that happened before we were born, it's often hard to think about 1930s-1940s Germany as anything other than World War II and the facts we learned in history class, but that picture doesn't begin to dive into all of the stories being lived out at that time.

Beyond the war and the bombs and the holocaust, there were lots of individual stories -- and I love this portrait of a child just starting to grow up at this tumultuous time. A person who didn't just go through this lengthy event, but whose whole life was shaped by it.

The beginnings, in which Rudy and Liesel do lots of silly and stupid things, including ice over the road in order to steal food from a boy on a bicycle. I almost died laughing during this story (while also feeling horrified, of course). In the middle of Nazi Germany, kids are still kids.

I will forever picture Rudy as the boy who painted himself black and ran around as fast as his legs would carry him, proclaiming that he was Jesse Owens.

And then, as they begin to get older, and become more aware of the things going on around them, we get to see them react to the horrors of this time, the many repercussions of Hitler's actions trickling down and causing suffering.

They begin to realize how much is wrong with the world they are living in.

One of my favorite moments was after Hans let Liesel try champagne with him while at one of his painting jobs. Both a childish and very mature (and touching) reaction:

"In the basement, when she wrote about her life, Liesel vowed that she would never drink champagne again, for it would never taste as good as it did on that warm afternoon in July."

I hope this doesn't sound too morbid, but I loved the concept of using the personification of Death to tell this story for two reasons.

Firstly, because he is a presence that is able to see anything that happens and therefore has knowledge that a human narrator would not possess.

Secondly, because he is able to provide fascinating insight on the situations he is telling us about. His statement about how young men in war think they are running at each other, but really, they are running toward Death struck me powerfully.

His care and concern over the souls he transports away at the moment of dying was an interesting picture as well. Not Death as the dark one who comes to ruin people's lives, but Death as the being whose job it is to witness the end of each life, without taking any joy in it.

"Believe me when I tell you that I picked up each soul that day as if it were newly born. I even kissed a few weary, poisoned cheeks. I listened to their last gasping cries. Their vanishing words. I watched their love visions and freed them from their fear."

For a book about a girl who grows up in Nazi Germany, I don't think the author could have chosen a more perfect narrator.

And, on the subject of death, I will admit that I ugly-cried during the last 30 minutes of reading. Has anyone seen the movie? I'm not sure I can bring myself to watch it. (I still haven't been able to make myself watch The Fault in Our Stars, by the way.)

1. What were some of your favorite moments in this book?

2. Beside the main character, which one person stood out to you and why?

3. There is an ongoing theme about the power of words -- words were what brought Hitler to power, words from a small girl that returned joy to a suffering Jew, words that seemed so helpless when Liesel needed them the most. Do you agree that words alter the course of lives? And what thoughts do you take with you after reading the words in this book?