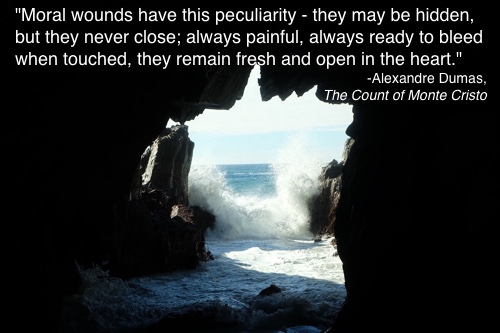 I'm sorry this is up so late! Truly, August became an insanely busy month and I have to confess ... I didn't get anywhere close to finishing the book (hangs head). It's the first time I haven't finished a book club book and it wasn't due solely to length because I just had trouble finding days where I could read at all.

How did you all fare?

At least I can fall back on the fact that I have read this book before. It won't help me remember all the details I didn't get to yet this time around, but I do at least know the characters and generally how it progresses and concludes.

This is one of my favorite classic novels. (One of the reasons I really wanted to read it again!)

I remember being angry at the deception leading to Edmon Dantes' imprisonment and my fascination at how he escapes by nearly (accidentally) being drowned. Then the intricate planning, once he has the buried treasure, behind how he is going to exact revenge on those who ruined his life.

All I could think, after the book, was that even though there are some good deeds done, such as rescuing Morrel from bankruptcy, it struck me how veangeance overtook Dantes.

It's not that he shouldn't feel angry at those who wronged him or that he shouldn't want to see some form of justice come to them, but I remember how it consumed him and it seemed to me like he remained in prison long after he had physically escaped because he couldn't forgive and get back to life.

On a lighter note, I'll admit that when younger me read this, I also fascinated by the idea of finding immense wealth and becoming mysterious and powerful. Not necessarily for the sake of revenge, but just because it was cool to find out where Dantes was going with each revenge story as it unraveled. Kind of like reading a detective case.

Well, like I said, I can't go as in-depth as I would like, which is sad, because this book deserves some robust discussion! But I just had so much going on last month that the time caught up to me.

What thoughts did you have?