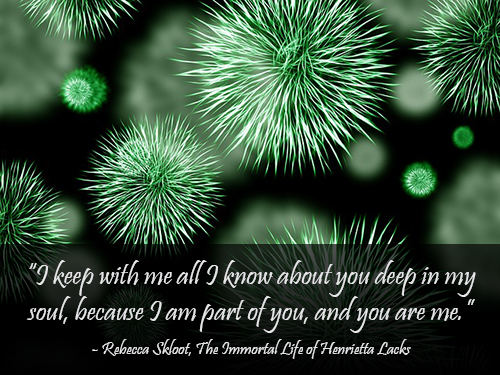 It’s that time again – I hope everyone’s raring to talk about this month’s book because I personally thought it was an incredible true story.

I have to apologize in advance if this post is shorter or less impassioned/deep in any way than my other book reviews. I’ve been traveling so much that I wasn’t able to write it until today (normally I write it immediately after finishing each book so everything’s fresh in my mind) and I don't even have much time now. Hopefully you all have lots of thoughts regardless because I do have some tough questions!

First of all, it’s crazy that I made it this far through life and had never heard about the person who made so many scientific and medical breakthroughs possible. In my opinion, her name should be in all of the textbooks, at the least.

Her story is utterly fascinating. It was hard to read about all the pain that she and her family experienced during their lifetimes due to her cancer and the subsequent lack of communication from all parties involved with them.

It seems like it was a product of many things, but mainly the times. Without all the protections that we have today (and expected right to information), Henrietta and her family suffered from more uncertainty and worry than anyone should ever have to.

Truly, they should been enabled to feel only pride in what Henrietta helped make possible:

“I’ve tried to imagine how she’d feel knowing that her cells went up in the first space missions to see what would happen to human cells in zero gravity, or that they helped with some of the most important advances in medicine: the polio vaccine, chemotherapy, cloning, gene mapping, in vitro fertilization. I’m pretty sure that she—like most of us—would be shocked to hear that there are trillions more of her cells growing in laboratories now than there ever were in her body.”

I will not omit the fact that I cried several times during the book – over the causes of Deborah’s anger and fear, the lack of recognition their family received until much later and especially when Deborah passed away.

She seemed as incredible a woman as her mother, not wanting to hold onto hate, but continually trying again to trust people and understand the truth of what had happened and was still happening with her mother’s cells.

In equal parts, I enjoyed reading about the history of what happened to Henrietta’s immortal cells, why they continued to reproduce and grow, and also the story about her life and her family. Simply almost too incredible – it’s almost like reading science fiction, except you know that all of those events are true.

1. What parts of this story stood out to you?

2. Had you ever heard about Henrietta Lacks or even the shorthand HeLa before reading this book?

3. Also (because I think it’s a really complex question), do you think that her family is owed something in return for her contribution? Health insurance? A large check? Broader recognition?

4. How do you feel about learning that you have no legal rights over the tissue that you leave behind in hospitals and doctor’s offices? (After giving birth, having a mole removed, etc.)