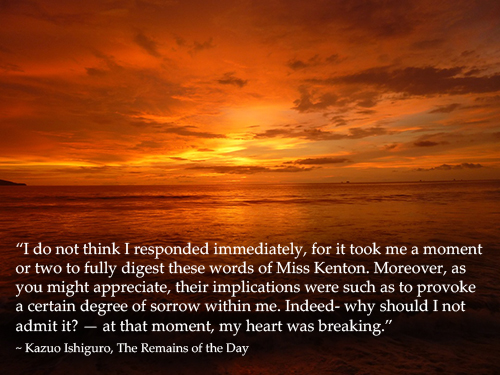 Purple Fig Club: The Remains of the Day

Wow, what a short yet heavy book to start the year with, am I right?! I made it a point to write up my thoughts immediately after I finished the last page of this book. I often that, while some books require time to fully digest (which this one may end up doing), I often get my most passionate opinions out if I just start writing out my thoughts immediately.

Do you find that to be true for you? At any rate, let’s take a look at the contents of this book and see what you all thought of it too. Happy first Purple Fig book of the year!

You could say that this book is about a number of different topics and you wouldn’t be wrong about any of them.

You could say it’s a look at the servant class at a time period where such employment was still widely practiced and how having work of this sort impacted the life and outlook of one man in particular.

You could describe it as a characterization of a man who became so caught up in the type of person he wanted to be, particularly at a professional level (but really his profession became his entire life) that he missed out on other opportunities. (Though his strict mannerisms make for some wonderfully dry humor now and again – his troubles with understanding banter, for example!)

And you could even, as I originally thought, consider this book to be a love story. Certainly the hints of it are enormously subtle. I’m not sure I can definitely state that I would have caught them if I hadn’t seen, or at least partially seen, the movie adaptation of it … because I certainly can’t unwatch it, so I’ll never know for certain if I would’ve caught on. (And honestly, I wouldn’t want to unwatch it – you can’t beat Anthony Hopkins and Emma Thompson!)

But at the heart of this story is a message that I think exists for everyone. I suppose I’d assert that it’s more potent the older you get. I feel it somewhat now and I’m certain I’ll feel it more strongly in the coming years as well.

I can’t possibly describe it more beautifully or precisely than is done in my two favorite passages from the book. So, if you have the patience, I’m going to transcribe them both here. One is just beyond the halfway point and the second is at nearly the last page.

“But what is the sense in forever speculating what might have happened had such and such a moment turned out differently? One could presumably drive oneself to distraction in this way. In any case, while it is all very well to talk of ‘turning points,’ one can surely only recognize such moments in retrospect. Naturally, when one looks back to such instances today, they may indeed take the appearance of being crucial, precious moments in one’s life; but of course, at the time, this was not the impression one had. Rather, it was as though one had available a never-ending number of days, months, years in which to sort out the vagaries of one’s relationship with Miss Kenton; an infinite number of further opportunities in which to remedy the effect of this or that misunderstanding. There was surely nothing to indicate at the time that such evidently small incidents would render whole dreams forever irredeemable.”

And if you’re still with me – one more!

“Perhaps, then, there is something to his advice that I should cease looking back so much, that I should adopt a more positive outlook and try to make the best of what remains of my day. After all, what can we ever gain in forever looking back and blaming ourselves if our lives have not turned out quite as we might have wished? The hard reality is, surely, that for the likes of you and I, there is little choice other than to leave our fate, ultimately, in the hands of those great gentlemen at the hub of this world who employ our services. What is the point in worrying oneself too much about what one could or could not have done to control the course one’s life took? Surely it is enough that the likes of you and I at least try to make our small contribution count for something true and worthy. And if some of us are prepared to sacrifice much in life in order to pursue such aspirations, surely that is in itself, whatever the outcome, cause for pride and contentment.”

My last comment before I turn it over to you all, now that it occurs to me, is that I don't see Mr. Stevens as without flaw. He's certainly prideful and insensitive on many occasions. But I still think that his story is a relatable one, even though none of us has ever been a butler in 1950s England, and perhaps his flaws are what keep him in our realm of understanding.