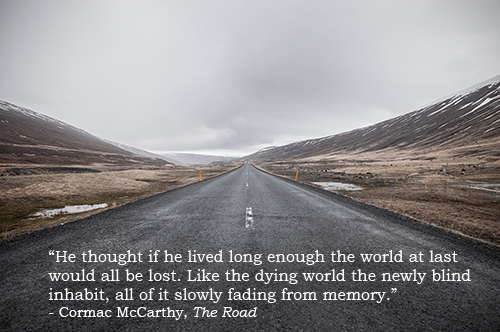 This book came at exactly the right time for me – a quick and enjoyable read during a month where things have been rather hectic. Although, admittedly, a bleak winter day would have been a better setting for the tone of the story.

But while the book wasn’t necessarily cheery, I did think it was extremely well written and I enjoyed the journey the author took me on – because, thankfully, I didn’t literally have to take that journey. Let’s discuss!

I didn’t remember many of the details, fortunately, but some of them came back as I read the book. I now vividly remember my terror at the moment they enter that house with the locked basement full of people waiting to be killed and distinctly recall yelling (in my head), “GET OUT! GET OUT NOW!!! FASTER, YOU IDIOTS!!! OH NO, THEY’RE GOING TO BE CAUGHT. I CAN’T WATCH THIS. RUN!!!!!!!”

Actually, now I kind of want to watch it again. Lol.

So, firstly, I want to save that I loooved the style of this book. The combination of the lack of chapters, the dialogue woven right into the narrative (and the perfunctory style of it) and the occasional interruptions that usually described feelings or memories – it was so beautifully written!

The non-stop trudge of the words meshes perfectly with the endless struggle of the father and son to continue down the road and survive. There is no stopping and resting. There is only pushing on. Genius.

I also like that you can’t tell for sure about any setting details. For example, we have no idea what caused this apocalypse. We don’t know precisely how long it’s been since that event (though there are clues to give us a general idea). We don’t know where in the world they are.

It really adds to the feel of this pervasiveness greyness: the bleak landscape, the lack of joy and hope, the physical struggle. There are no sharp edges, only blurred lines.

It truly is a depressing picture of life, where it’s really hard to figure out why you want to continue to stay alive if all you face is hardship and stress. Yet I enjoyed reading the story for the experience of it – an imagining of a time when man returns to survival mode – a place most of us know nothing about.

The dual nature of the road is an interesting place to mull for a minute.

The father and son need it for directions, as a way to stay near civilization so they can scavenge and as a means to cart along their few possessions.

The road gangs use it to prey on just such people, so it is a place of life, but also a place of death. A necessary evil?

I like how the author constantly weaves that phrase “the road” into the story again and again. Because it is the one constant – the way, the means of survival, the point of crisis, the traitor, the savior, the hub, the historian, life, death. It’s fascinating.

The small moments here and there of the boy’s innocence – wanting to help everyone around him, asking whether there are any other good people left, praying a thank you to whoever left the bunker for them to find – are the real tear-jerker times. I think he can afford to think this way because his father can play the cynic and survivalist for him. It seems like an attitude that is inevitably fleeting in this environment, but is also possibly what has kept him and his father on the side of “the good guys” for this long.

“The boy sat staring at his plate. He seemed lost. The man was about to speak and when he said: Dear people, thank you for all this food and stuff. We know that you saved it for yourself and if you were here we wouldn’t eat it no matter how hungry we were and we’re sorry that you didn’t get to eat it and we hope that you’re safe in heaven with God.”

I was sad when the father dies at the end. I initially found it depressing that they held on for so long and then the boy was left on his own.

But I thought about it some more and I felt like it wasn’t as hopeless as it initially seemed. I can’t even recall how many times the boy asked his dad about “other good people out there” and “carrying the fire” and you know, deep down, that there are no good people left.

And yet the story ends with people who seem to want to help the boy so he’s not alone, so it’s possible that in the end, his father didn’t believe and passed on. But the son, who never stopped hoping, ended up finding the very type of people he was looking for all along.

That’s not to say the father was wrong and he got what he deserved. At all. It’s just an observation.

At any rate, I’m wondering what everyone else thought about the book. No specific questions this time, other than maybe talk about what parts stood out to you and what you thought the message was – is it a nihilistic rant? A story of hope? What did you take away? (I almost feel like the takeaway depends on the person – I could see people coming away from this book feeling completely the opposite.)