First I went to the Big Easy and now the Big Apple. It's good to be back in Little Apopka though. With Adam having injured his foot just one week before our vacation, I'm surprised we got around to as much as we did, but I'm grateful we had such a wonderful time!

It was hard not to share every single picture we took here, but I tried to pare them down so as not to completely inundate you. Honestly, I'm surprised we got as many photos as we did because it was so unutterably cold at times that I just couldn't bring myself to de-glove. Fortunately, I used my gloves with the touchscreen capability one day and Adam also brought his nice camera, so we were able to get some on at least a couple days that didn't leave us with frostbite. Lol.

I guess we'll just go chronologically. If you follow me on Instagram (starlingsings), you may have seen a few of these already, but I'll post a lot more here than I did there. Plus, these are mainly the unfiltered versions, for whatever that's worth.

On the first day, which was last Friday (the day we flew in), we walked down to Times Square after lunch. 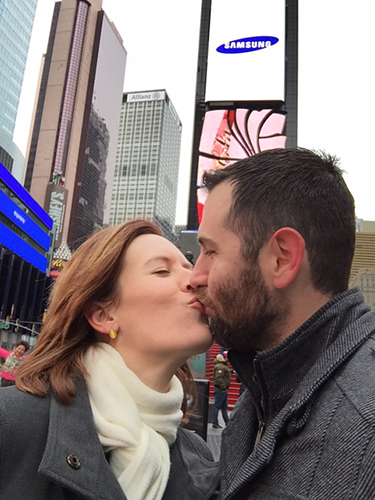 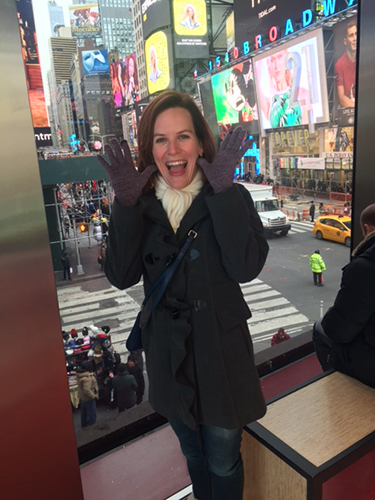 And then made our way a little farther to Grand Central Terminal. First shot is of the outside and then, rather than post a bunch of pictures, I figured I'd share the time lapse video Adam took of the inside. I mostly like watching the couple near the front at the beginning of the video and also the people going up and down the stairs.

I'm so glad we didn't end up here on our next to last day in the city because a pipe burst and they lost power. Yikes! 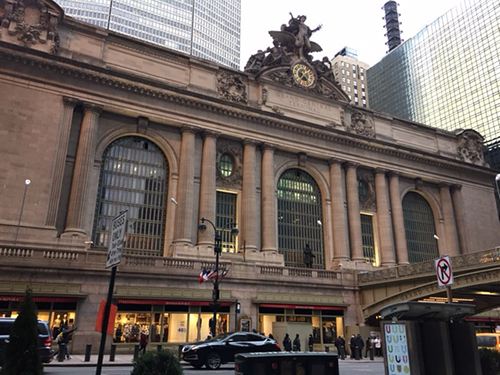 On day 2, we purchased metro cards and took our first Subway ride! 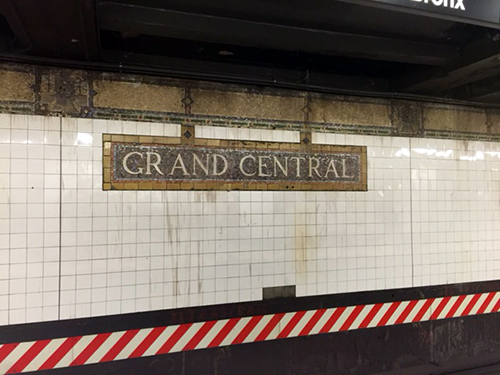 I have to say, I did start figuring out the subway lines and how to use the transit option in our iPhone maps app after a couple days, but it's still sometimes confusing! Plus, with the weather being as cold as it was, my goal was always to figure out EXACTLY where the subway entrance was that we needed and then where EXACTLY the place we were going was from there. Because the last thing I could handle was exiting the subway in single-digit temperatures and pulling my hand out of my glove while standing still in the biting wind to figure out directions.

And that's the thing ... it wasn't just cold. I'm pretty good with cold. I'm actually better with seasonal cold than I am with low A/C settings indoors. I don't know why. It's just the way it is.

What killed me was the wind. Holy cow! It's one thing to be in like 14-degree weather. It's another to be almost pushed over with arctic-feeling gusts. It was nuts!

Our first stop on Saturday was Midtown Comics. Yay, geeks! (If you look closely, you can see both Adam & me in this picture.) 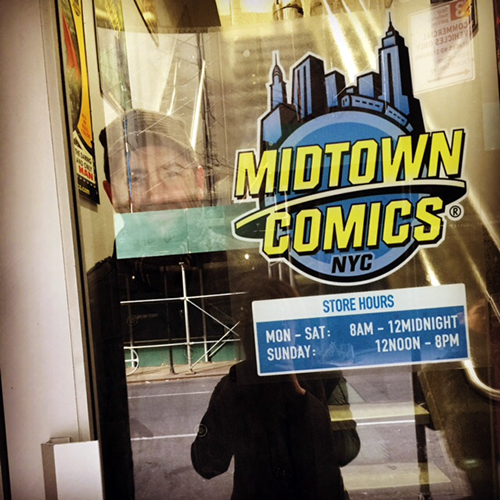 As soon as you open the door, these are the stairs you see going up in to the store... 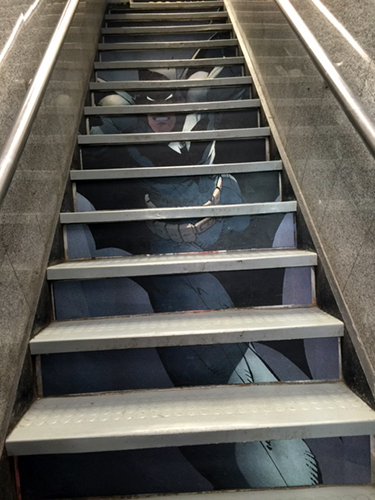 After milling around for a while (and returning to acceptable body temperatures), we then made our way to the Flatiron District to see one of the buildings Adam was looking forward to: 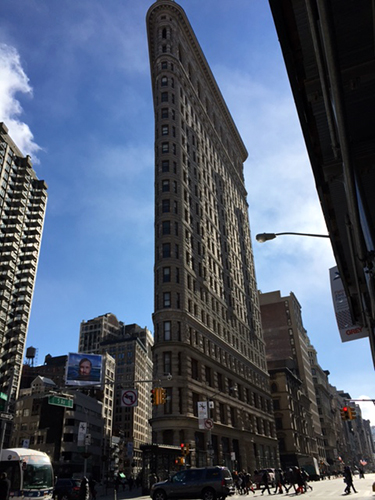 Pretty awesome! And, although you can't tell in this photo, this moment was my worst, most coldest (yes, most coldest), most desperate I-have-to-get-out-of-this-wind-right-now-or-I-might-actually-die moment of the whole trip. I felt badly about it because I wanted to spend more time looking at the Flatiron building and taking pictures, especially for Adam, but it was kind of a fight or flight situation. I'm not sure I'm even joking although it sounds hyperbolic now. Lol

Oh, which reminds me. One thing I learned about cold weather. You need a puffer jacket. I love my coat and it did right by me on this trip, but if I go into winter temperatures like this again, I will be investing in new outerwear.

So, to save our lives, we ducked into Marimekko (I love you but can't afford you!) and then the Lego store. 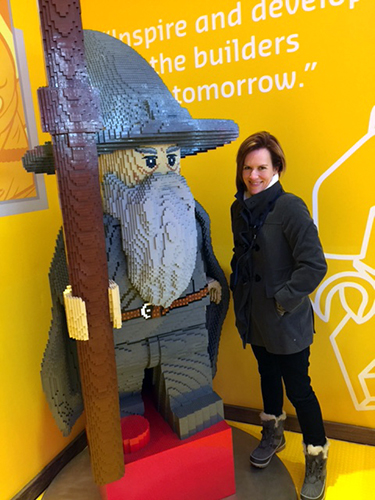 And btw, the boots I bought for this trip (I think this is the only photo you can see them in) were a-maz-ing. I would not have survived without them.

It was at this point in the trip that we finally bought me a hat (who knew they were so crucial?!) and I made Adam buy a coffee from a place named Grumpy's. Apt! (J/K) But I love the logo. 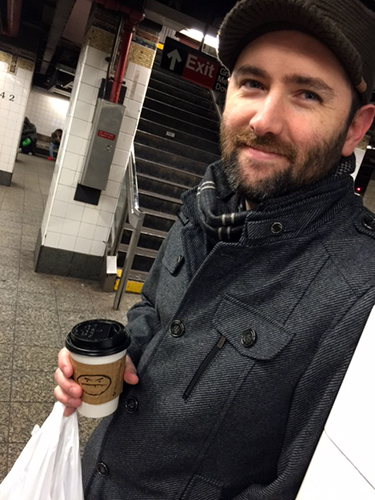 On Sunday, I woke up to this: 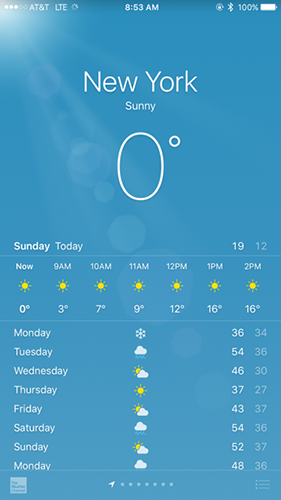 So we took a bit of a slow morning to let things warm up a little. And then we decided that today would be the day we would go get a slice of NY pizza (one of my goals). I chose a place at random because it had good reviews and looked to be in Little Italy.

On the way, we passed by Radio City Music Hall. 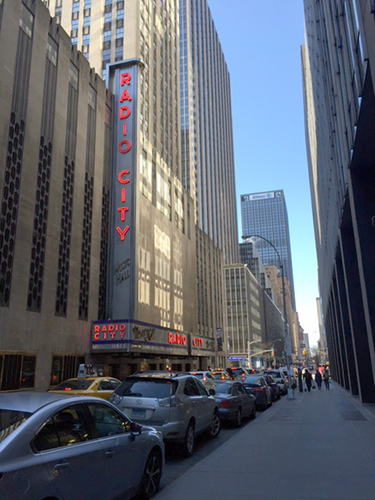 I risked my fingers to get a good shot and then we continued on to lunch! It was only after we'd been seated and I read about the restaurant on Wikipedia that I realized I had inadvertently picked the offical oldest pizzeria in the entire country. Serendipitous! The place is Lombardi's, in case you're ever in NYC and want to try it out.

You can definitely tell from the photo that this pizza was one of the best things I've ever put in my mouth. I can taste it again just looking at this pictures and it's making me very sad that the possibility of getting another one is over 1,000 miles from me right now. Sigh... 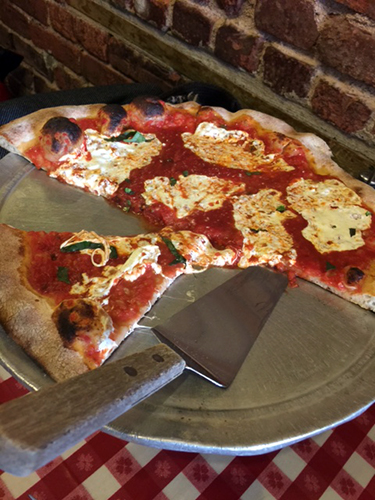 All right, snap out of it!

After lunch, we walked through the rest of Little Italy and on down into Chinatown, which was also fun to look at. Then we wandered over close enough to snap a few shots of the Brooklyn Bridge. 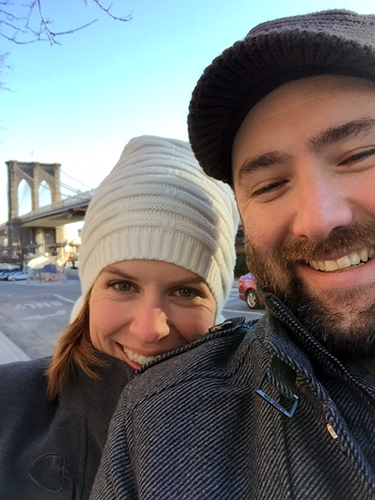 (And yes, all further photos of me will contain this hat.)

Sunday night (Valentines!) was the day we had purchased Les Miserables tickets and that was totally worth the investment! So good!!! Plus, I had an extremely proud night because I figured out the subway line to take, which exit to use, where the theater was exactly and how to get back. Seamless! 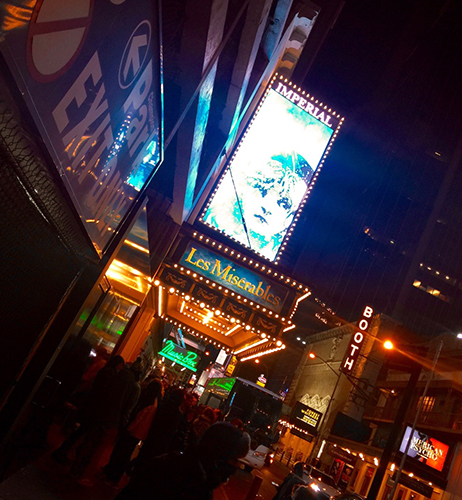 Monday was our big day. We had pushed back a few things we wanted to do over the weekend because it was just way too cold and windy, so Monday was our last good chance to see some of our big ticket items. On our way to the first one, Adam took this cute shot of a Valentines souvenir. 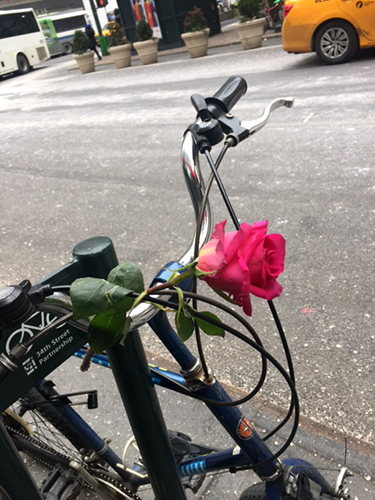 Oh, also! I forgot (and also didn't take any pictures), but we achieved one of my other (food) goals, and got NY bagels for breakfast. They were just so absolutely incredible, I can't even compare them to another bagel I've eaten. My cream cheese was cheddar & bacon! Whaaaat?! So good!!!

And then ... we wandered past Herald Square and on to the Empire State Building! (We took a ton of pictures from the observation deck. It was so pretty.) 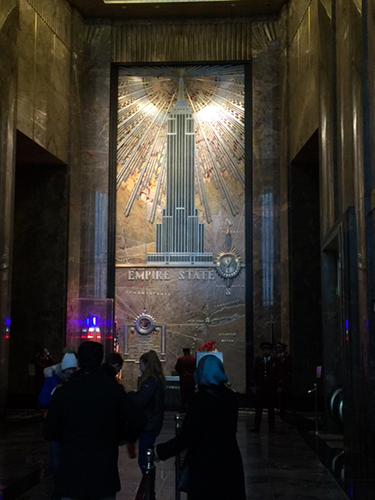 You can see the spire of the Chrysler building near the center of this photo. 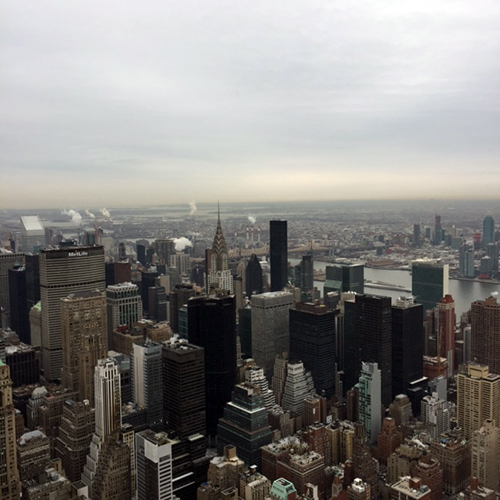 And here, the Statue of Liberty! 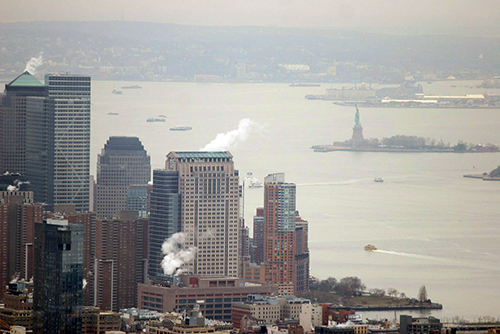 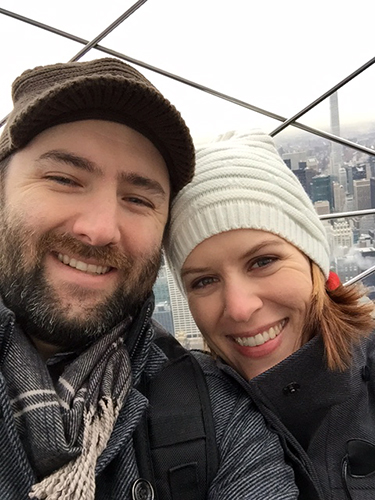 From there, we hopped on another train and went all the way to the bottom of the island to Battery Park to see the Statue of Liberty up close. And I know it's totally invisible in this picture, but it was snowing! Yay, Adam got his first snow day in life!!! 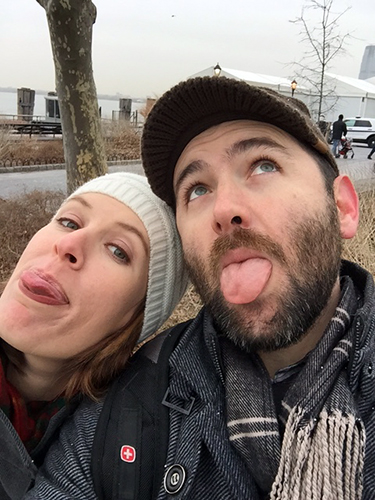 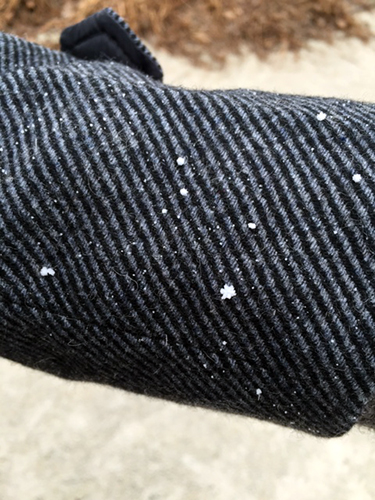 I'll be honest. I had originally wanted to ferry out and to the whole Ellis and Governors islands thing, but with Adam's bum foot (he was such a trooper!) and the blustery weather, we just decided it wasn't meant to be. So I unfortunately don't have a better picture for you, but it was still so awesome to see the statue so close. 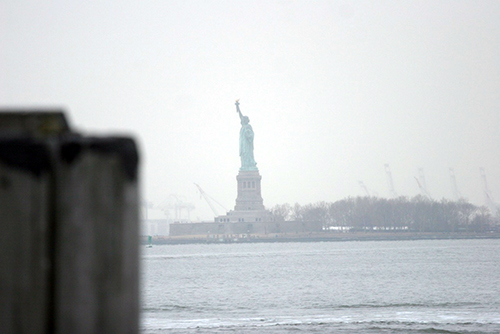 Last stop of the day was to see Central Park and, more specifically, the Guggenheim Museum (which directly faces the middle of the park). Definitely one of the things Adam was interested in seeing. Frank Lloyd Wright! I just realized though that I didn't get him to send meany of the pictures we took of it, so you can just see it here.

And then we wandered Central Park. Romance! 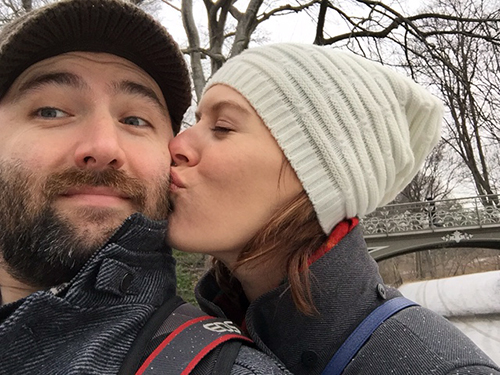 The last day we were there was rainy, so we just chilled in our room a bit before heading to the airport. So to end on a high note, I'll leave you with these shots of snow! (We made snowballs from what had collected in some of the public benches and threw them at each other. Fun!!) 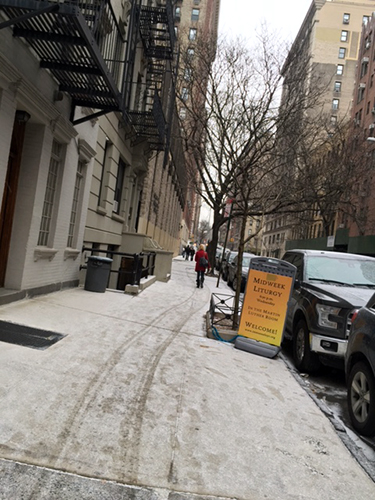 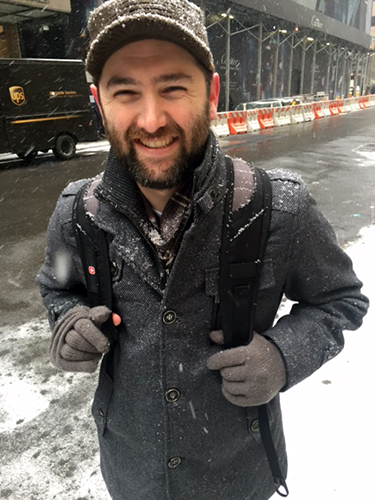