I ended up getting to do and see WAY more in New Orleans than I anticipated. I'm not going to lie. I did end up ordering room service and working on two of the nights I was there. (It's hard to keep up with my day-to-day work when I'm at an exhibit hall booth all day.) But I wandered around the city twice on my own during the day and went out with a few people from my team one of the evenings.

So I have quite a lot of pictures for you! I think I took more than 50, all told, but I tried to pick my best here for a sampling of what I got to see this week. Enjoy!

Firstly, I have to tell you my departure story. I'll keep it short. Basically, I somehow got VERY confused about when I was supposed to leave the house (doing too many things at once). I ended up leaving the house at the time I had intended to already be at the airport. Uhhh ... whoops!!!

Obviously at that moment, hyperventilating doesn't help. You pretty much have to just get going and see what happens. Adam says he's never seen a face look so panicked, though! I have to admit, I sped just a liiiiittle bit more (10 over) than I ever do normally. And having TSA pre-check probably saved me some. But I had just enough time to buy and eat breakfast before they started boarding me, so thank goodness!

At any rate, when I finally did get checked into my hotel, they upgraded me to a room with a view since I had to wait a few hours. So, no thanks to anything but a little luck, I got some gorgeous pictures right from my hotel window. Hellllloooo, Mississippi River! (I also posted a nice shot of the Mississippi on Instagram, in case you don't follow me there and would like to see.) 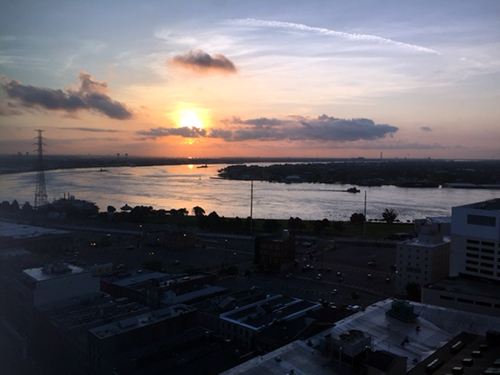 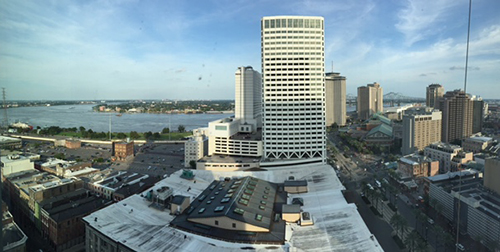 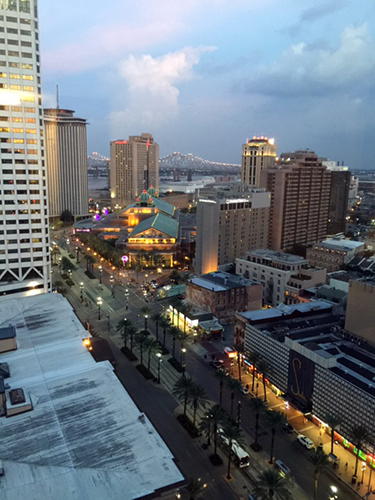 My only complaint was that the hotel didn't have much soundproofing. I heard every ambulance, police car and boat horn at all hours. LOL. New Orleans is not a quiet town.

And speaking of not quiet, I took a walk down Bourbon once during the day by myself and once at night (with 4 male co-workers for protection). Fascinating but smelly and pretty much not for you unless you're planning to get drunk and do stupid things (so, not really for me.) But interesting to see at least once!

(Being me, I took pictures of the historical signs around town too, which I'm sure no one else pays any attention to.) 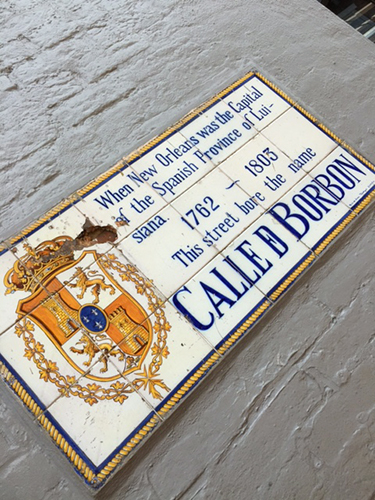 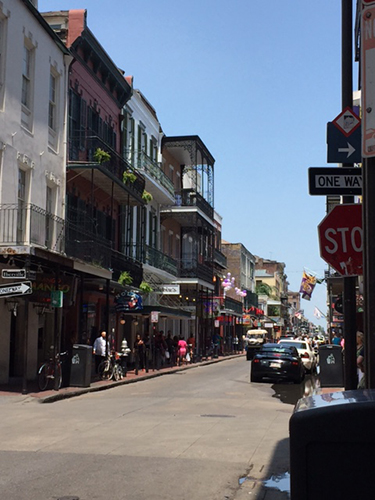 The road is way longer than I expected. It goes on for blocks and blocks. With lots of bars and ... you know... the regular types of shops you can find just anywhere... 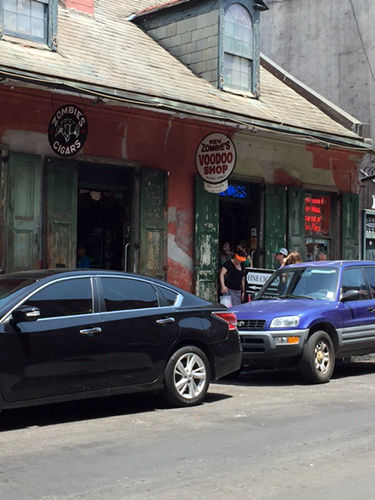 I realized somewhere around here that I had wandered far enough up Bourbon Street that I was only two blocks west of Jackson Square, so I meandered in that direction next.

The outside of the square is surrounded by iron fencing where artists hang their wares and people stand on various corners playing brass instruments for tips. All of it covered by absolutely gigantic and gorgeous oak trees. 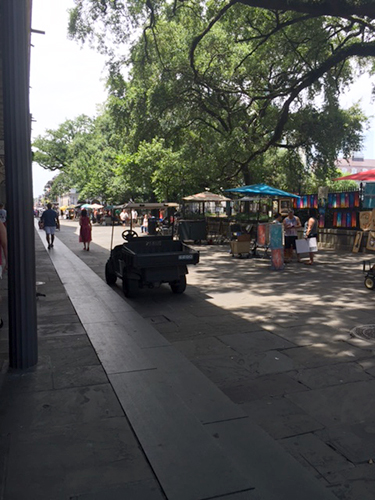 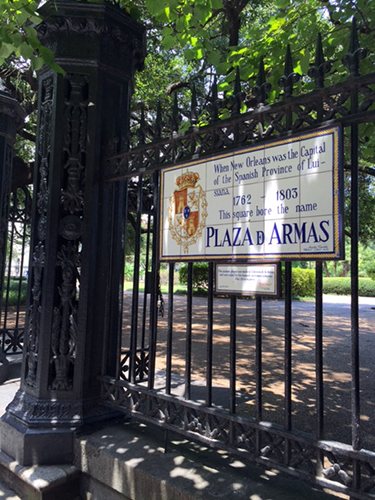 Inside the square, you find the reason for the name of it: a statue of President Andrew Jackson. I had to look it up, but I believe his statue is there because of his particpation in the War of 1812 and the Battle of New Orleans -- there's some history I don't remember the details of! 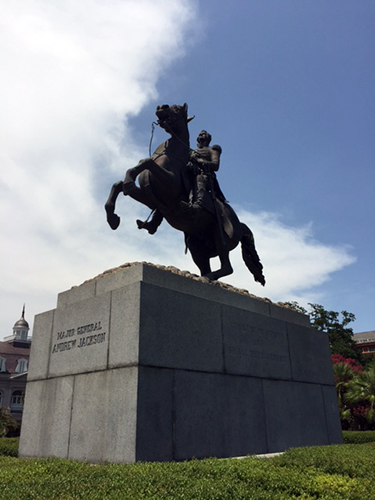 And a magnificent view of St. Louis Cathedral. 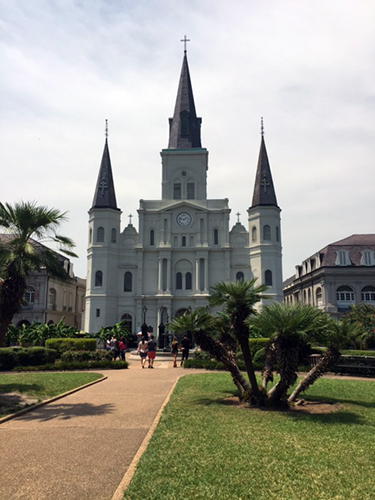 I also got a glimpse of a paddleboat across Decatur Street. 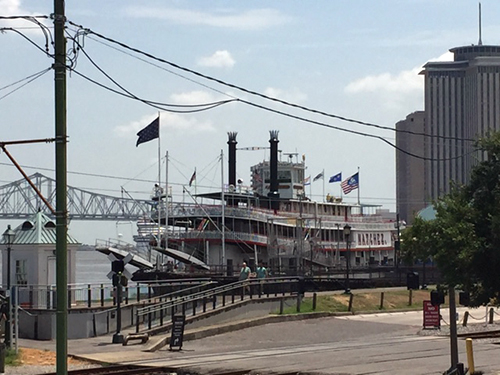 On Tuesday evening, my team and I wandered over to another company's sponsored event at the Napoleon House. Technically, the house belonged to Mayor Girod, but he at one point offered to let Napoleon live there during his exile. Napoleon died and never lived in the house, but it is still widely known by that name and is currently a restaurant.

See the fun sign shape hanging up there?Also, the house was built in 1797, which shows, I think. 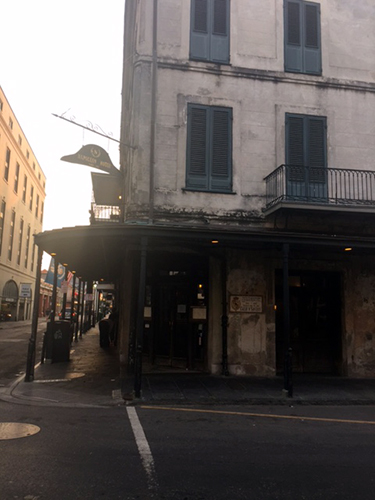 I got a few shots inside of the stairs and then the courtyard to the right. 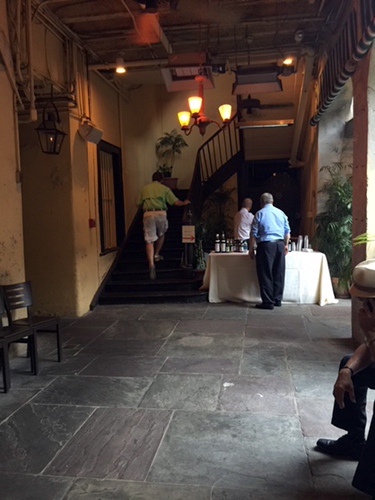 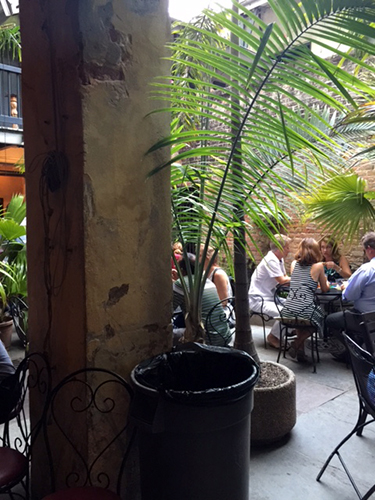 There are too many people and tables in the way to see it, but behind them, there was a pretty stone fountain against that brick wall.

This style of walking into a building via courtyard entryway before actually entering the inside was one of my favorite things about the New Orleans architectural style. You get a cool breeze and some nice light on your way in instead of just opening a door.

It was the same style at the restaurant we went to eafter leaving here, called The Gumbo Shop. I ordered a sampler platter and got to try authentic gumbo, jambalaya and crawfish etouffee. I've never eaten so many delicious things off of one plate and I was entirely stuffed to the gills! Totally worth it though.

Yesterday morning, I made a plan to get up early and walk to the famous Cafe du Monde, eat beignets and coffee, get some additional ones to go and then walk back to my hotel, check out and catch the airport shuttle.

It worked out perfectly! 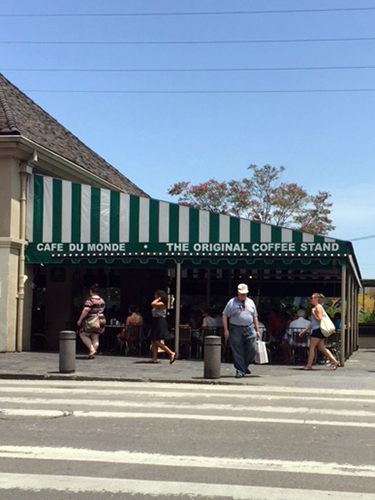 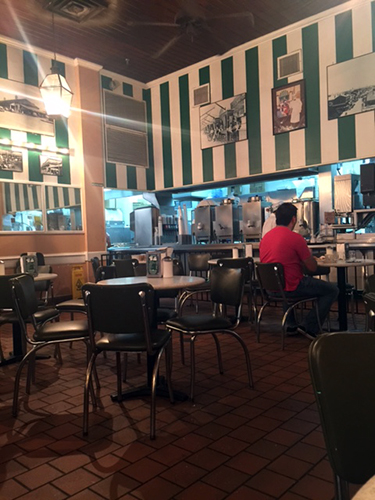 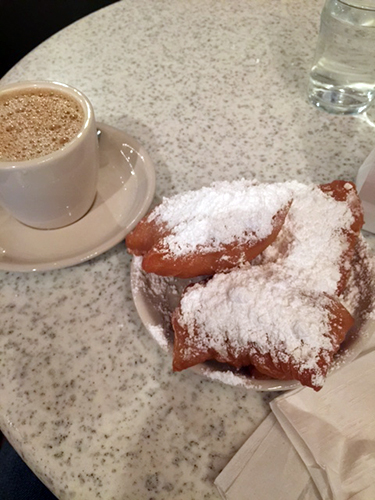 Incredible! Both the coffee and beignets were absolutely scrumptious! I'm so glad I made the decision to go. And I brought my to-go order home so Adam and Thomas could try them. I put the paper bag they came in inside a drawstring bag and then inside my laptop bag and somehow, by some miracle, I did make my plane smell like donuts! (They obviously weren't as hot and fluffy as when I ate them that morning, but they were still amazingly good. I was proud to bring a unique bit of New Orleans home for other people who didn't get to go.)

I will not, however, describe to you the amount of sweat I produced while gathering all of the above pictures. Hoo-whee! Louisiana is a muggy place, and that's coming from a Floridian!

Anyway, I hope you all enjoyed looking at my photos at least half as much as I enjoyed taking them. I feel very blessed to have a job where I get to see and do so many amazing things.

Oh, and not that this blog post needs to be longer, but I should mention that at the actual conference, we invited Elizabeth Smart to be the opening keynote speaker and then come by our booth and sign some copies of her book for people. I don't know if you remember her story of being kidnapped and held hostage in 2002, but it's an incredible one. And she now works through her foundation with various government groups to catch people involved in sex trade, particularly the trade of children. Absolutely amazing to get to meet her and hear her story.

And with that, I will wrap this up!