Hi, everyone! I know I went off the grid over the holidays, but hopefully you all did too because you were busy with fun family things. This week I've been meaning to post a couple of things, including prepping some advance book reminder posts, etc., but believe it or not, when you take time off work, things tend to be super busy when you start back up.

Still, I have a fun story to tell you from my day yesterday (and technically part of today), so hopefully you're still checking back here occasionally to make sure I'm still alive!

On Tuesday, I saw in my Twitter feed that Brandon Sanderon was going to be doing a book signing on Thursday! Brandon Sanderson just so happens to have written some of my favorite fantasy novels and series. And I think both Mom & Andee have at least read his Mistborn trilogy. I'm currently forcing Andee to read another of his books (although, to be fair, I told her I'd read Outlander in exchange, before she was kind enough to put it on this year's reading list to give me more time).

Anyway, Sanderson completed Robert Jordan's epic Wheel of Time series after Jordan passed away and he's also written copious other books -- some series, some one-offs. He just had a new book come out this Monday, which is part of a series I'm reading called The Reckoners. (Truly, it's my goal to read all of his stuff at some point. He's that awesome.)

And on top of coming out with new books all the time (which don't seem to suffer, considering how many he publishes -- the man is tireless), he also teaches a university writing class and co-produces a podcast on writing.

Anyway, I'm getting off track...

The signing was at Books & Books in Coral Gables last night from 8-10p.m. Darn, it was in Miami, not Orlando, right? However, I also saw him say on Twitter more than once that he is rarely in Florida and that people bug him a lot to come to Florida, so here he comes and we better all show up.

Before I could put any real thought into it, Adam blurts out with, "You wanna go?! If you want to go, I'll take you."

I can't tell you whether I would've seriously considered actually going until Adam got all giddy and said he would totally drive me down there if I wanted to go ... but I'm guessing I wouldn't have. (This is why it's great to be married to someone who is still a small child in some ways -- contagiously excitable and always looking for adventure.) Anyway, I said "maybe" and didn't decide for sure until Wednesday night.

I erred on the side of adventure. (As Sanderson would say, sometime you just have to do it because it's awesome.)

Side note: Sorry, mom, that I didn't tell you I was coming down to Miami. Honestly, I knew there wouldn't be time to meet up with you and I didn't want you to feel pressured to drive out anywhere mid-week. We're still going to try to come down for your concert in May!

So I got permission from my boss to sign off early yesterday and at about 3:00 p.m., we set out. With traffic and all, we managed to get there about 20 minutes before the start of the event.

I bought a couple of hardback books to get signed (sadly, I've bought the majority of his works on my Kindle so I didn't have a lot to bring with me) and we settled into our chairs.

The event was great! He told some stories about himself, talked about writing in general as if we were one of his classes, did Q&A (with prizes!) and even did a reading from a rough draft of something he's currently working on. Then I got to go up and get my books personalized! And... 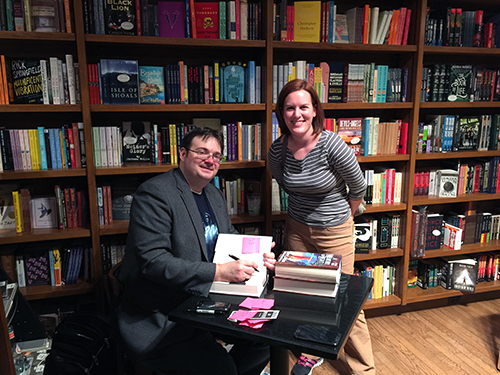 One of the books still available (because apparently a lot sold before we got there) was the third and final book in the Mistborn series (hardcover), so I got that one signed first. Please ignore my tired and baggy eyes from this morning... 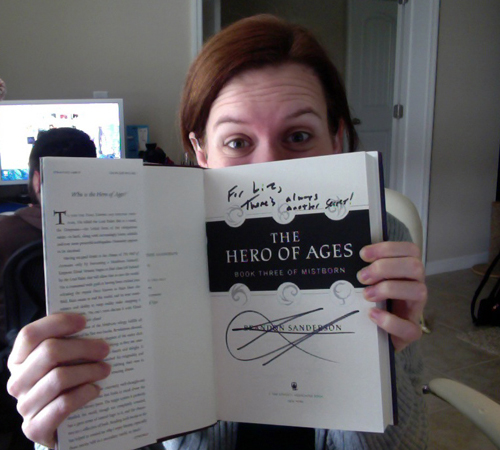 In case you can't read it, it says, "For Liz, There's always another secret!" Which is a reference from the book. So cool!!! I'm almost more excited about this now that my brain is functional again than I was last night driving back up.

At the point you see me in that picture with Sanderson, it's about 9:45, we've driven all the way from Orlando, we're really warm (beause that little room was hot!) and we haven't eaten dinner. Our first move upon getting out of the bookstore was to find some food!

Oh, one last thing! When I was getting my books signed, I mentioned that we had driven down from Orlando because we heard he didn't come to Florida often and he said the last time he was in Florida was after he finished book 13 of the Wheel of Time series, which was 3 or 4 years ago. It made me really glad we were able to make this trip. Also, for my sob story about the long drive to see him, he gave me one of the pop-up action figures he was using as prizes, so bonus score!

We made it back home just after 2:00 a.m., which ... all things considered, was respectable travel time.