Two Men Walk into a Bar…

Just kidding, but I really do have a story for you that reads a bit like a joke in places. It's one of those things that isn't funny when it's happening, but becomes a great story to tell later. I guess later is now.

I had to go to DC this week (Monday through Wednesday) for what I believe is the last tradeshow I'm attending this year (yay!).

On my flight up, I was seat 8F on my plane, but they stuck me in the last zone to board, so I ended up being forced to check my bag and then wait to pick it up when I got there.

So of course I was again disappointed when I was in the same seat coming back and again ... last zone.

(Honestly, how do they decide these things? I can pretty much guarantee you that half the people boarding in the last group aren't going to find any overhead storage space in these fee-laden days of air travel. Adam thinks they have monkeys throw darts at boarding passes to determine the zones.)

I actually got to the airport pretty early, so I grabbed something to eat and then went over to sit at my gate. A little while into the wait, I suddenly hear commotion to my left and look over to see a huge group of people all holding their phones up like paparazzi to take pictures and video.

Apparently a pickup outside caught fire. Which then set off the building sprinklers on the outside, so there was water just gushing down the windows for about 30 minutes. I ended up getting a photo myself later on... 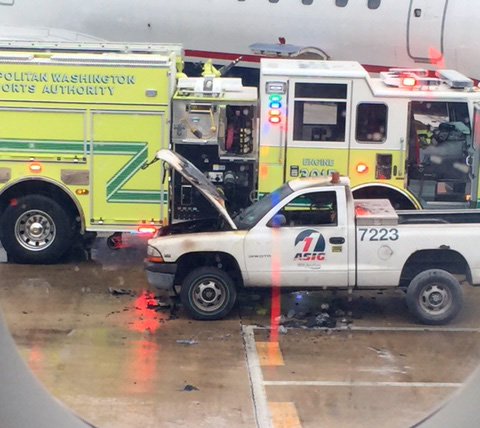 I have no idea what started the fire, but it was the first delay that I encountered. And I say first because it wasn't the last...

Shortly after this commotion began, I realized I should go use the bathroom in case they started boarding soon, so by the time I got back, of course my seat was gone. I was standing around waiting to hear when we would finally be able to board when this loud foreign family decided to get all up in my space (Eastern European?).

They were talking and laughing loudly, swaying around, bumping me multiple times, playing games where they kicked at each other's feet ... I can't even make this stuff up. Eventually, I had given so many annoyed looks to no effect that I stomped over to another area.

Thirty minutes later, they started boarding those needing assistance, so at least we were underway.

Almost immediately, they call two last names. Someone else's and mine.

My first reaction was, "Oh great, what's wrong now. Did they give my seat away?"

So I walk up to the counter and I thought I misheard him at first, but in fact, he said he needed me to go ahead and board. I'm thinking, "Wow ... I have no idea what's going on, but it's my lucky day. I will definitely get to keep my bag with me!"

Well, the short version of the next part is that the person in front of me had multiple sclerosis and was traveling with his caregiver. So I had to wait a few minutes for them to help him into the skinny wheelchair that can fit down the airplane aisle to his seat. Only, once he gets there, he throws up.

Initially the caregiver was worried he was having a seizure, but it turns out he just drank too much Bloody Mary at the bar before boarding.

So here I am stuck standing in the front of the plane, waiting for them to clean him up, get paramedics on board to check him out, wait for the paramedics to help him off the plane so they could do a more complete assessment, and then wait for the clean-up crew to sterilize his area.

Finally, they tell us we can start moving toward our seats. This is where I come to find out that the reason they had me and the woman sitting next to me board early was because there was a disabled man sitting in the aisle of our row. The unfortunate part was that they had already seated him, so it sorted of defeated the purpose.

Bottom line is that he had only one leg and couldn't get up without assistance.

So both the woman with the middle seat assignment and I had to climb over him in that tiny space to get to our seats.

Let's just say I REALLY had to pee by the time we landed.

Also, the kicker was that when they started drink service for the flight, the one-legged man (who was extremely nice) ordered a V8. And let me tell you ... nothing makes you feel more queasy than the smell of a V8 after breathing in Bloody Mary vomit for 15 minutes.

On that note, look how pretty! 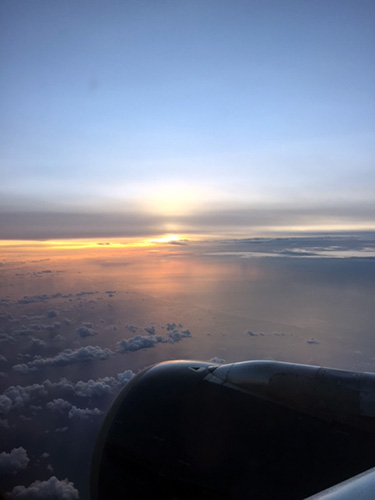 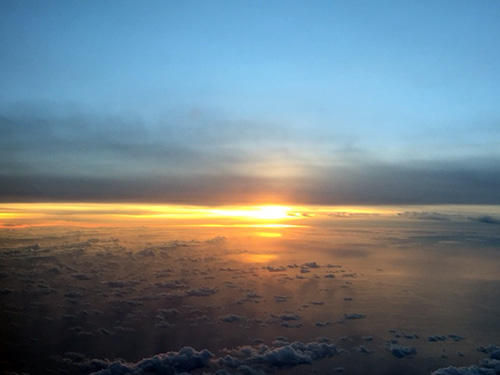 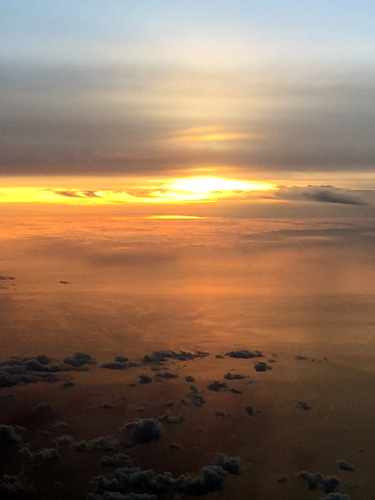