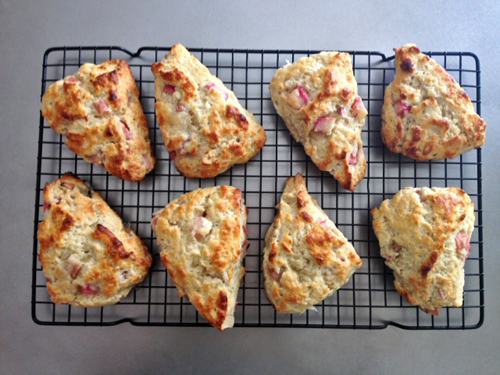 This entry is a few weeks overdue, seeing as I've made the aforementioned scones not once but twice and am already clamoring to have them again soon.

And I don't use the title "world's best scones" flippantly, seeing as I've never made a bad scone (is there such a thing?) and I absolutely drool over those apple and white cheddar scones I love. These are serious contenders ... in ... you know, whatever nonexistent scone-off I'm imagining in my head.

Unfortunately, I didn't think to take pictures for the blog when I was making these, so I only have a couple, but hopefully my words will paint the true picture of these beauties.

This all starts with my rhubarb obsession, of course. If I don't make something with rhubarb at least once a year now, I get really cranky. Combine that with the fact that Andee and I took a maiden voyage to Penzeys Spices in Winter Park not too long ago and I came away with the cheapest, freshest vanilla beans I have ever purchased (among other things ... seriously, I shouldn't be let loose in a spice shop).

Can I interrupt myself for a quick sec? Have you ever bought a whole vanilla bean? They're like $10 a bean in your local grocery store! And they're often dried out and brittle. Penzeys gave me 3 for $10 and they are the most succulent, aromatic beans I have ever held in my hands. Heaven! Sometimes, when I'm feeling frisky, I pop the stopper on the test tube they're sold in and take a whiff. Instant day improvement.

Andee and I have gotten into a routine of baking scones for each other when we and our husbands get together to hang out. You may have noticed an oddly high ratio of scone-to-other foods in the recipes sidebar lately and that's why. (And it's not nearly all of them!)

So. I needed a scone recipe, and I wanted it to include my shiny and new vanilla beans and some season-fresh rhubarb. So that's exactly what I Googled. 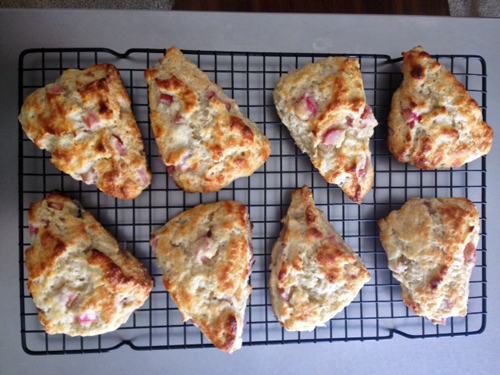 It was easy to narrow down the results to the one that yielded 8 (most easily split among 4 people) and used buttermilk (flakiness rules!).

Adam and I ran by one Publix and struck out: no rhubarb. The next day while I was at work, he popped by a different Publix and looked. Again, no rhubarb. Shockingly, knowing how much he avoids talking to people normally, he asked someone whether they had any rhubarb and, long story short, found out that they had a whole crate in the back.

One thing led to another and I guess since they couldn't quickly find the price and have a terrible time selling rhubarb at that location, they ended up offering him whatever he wanted for free!

He walked out of there with 2 lbs., most of which is now waiting in my freezer for me to come up with delicious things to make out of it.

So, let's get down to why these scones deserve to be placed at number one, even though I adore several of the other scone recipes I've made:

1. The fragrance of a fresh vanilla bean is intoxicating. If you haven't smelled it, you're missing out. Just making these scones is a treat. Eating them is only a bonus.

2. I got Andee's husband Chris to not only try rhubarb for the first time despite his qualms, but to like it AND to request these scones a second time around because he enjoyed them so much.

4. Not only are these easy to make, but you don't have to worry about squishing the "fruit" when you combine the dough because rhubarb is not smashable like blueberries. (Yes, I harbor bitterness against the imperfection of my not-purposefully-mashed blueberry scones.)

5. These are incredibly flaky and light, and you can take them up a notch by dressing them with some strawberry jam for that classic flavor combination. 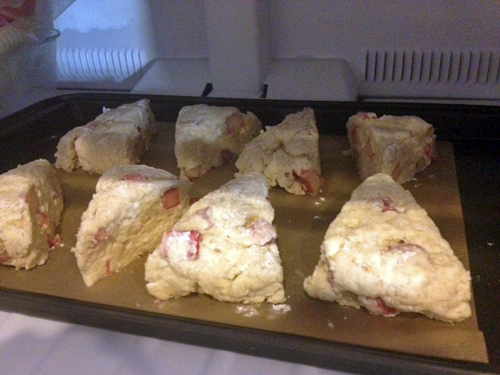 Yes, these are in the freezer.

When I made these the first time, I prepped them ahead of time, froze them and then baked them when I was ready. It saved me time on the morning I needed them and they baked great straight from the freezer! Just a few minutes extra.

If you make these, you will not be disappointed. If you haven't yet tried these and come to visit me, I will happily make them upon request.

Preheat oven to 425 degrees Fahrenheit. Prepare a baking sheet with a layer of parchment paper.

Place granulated sugar in a large mixing bowl. Cut vanilla bean in half lengthwise and, using a paring knife, scrape seeds from each half of vanilla bean onto the sugar in the bowl. Using a fork, mash vanilla seeds (which will clump because they're sticky) until well distributed throughout the sugar. Add rhubarb to the vanilla-sugar mixture and toss to coat thoroughly.

In a separate bowl, combine the flour, baking powder and salt together with a whisk. Cut butter into the flour mixture until the butter pieces are about the size of small peas. (Alternately, you can use a food processor.)

Stir flour mixture into the rhubarb mixture until combined. Pour 3/4 C. buttermilk into the bowl and, using a large spoon, mix until the dough starts to come together. Add more buttermilk as needed to incorporate all of the loose flour, but only 1 Tbsp. more at a time.

Liz note: At this point, I find it easier to use my hands to finish combining the dough. Also, if you accidentally add too much buttermilk, add a little flour to balance it. You want the dough to come together without being crumbly, but you don't want it mushy and sticky.

Transfer the dough to a floured surface. Pat and flatten it into a disk that is about 1-inch thick/tall. Cut into 8 equal triangles (like a pie). Arrange on baking sheet.

Optional: Use a pastry brush to lightly coat the tops of the scones with some additional buttermilk and sprinkle with sugar.

Bake 18-20 minutes or until browned on top and done through the middle. You can test doneness by tapping the top. They should sound hollow and not appear moist on the sides. Let cool for 5 minutes before serving.

Tip: You can make these ahead. Just finish them all the way up to placing them on the baking sheet (but before brushing with buttermilk) and put the whole sheet in the freezer instead of the oven. Let the scones freeze overnight, then transfer them to a freezer bag for longer storage. When you are ready to bake them, simply place them back on a baking sheet covered with parchment paper, top with buttermilk and sugar if desired, and bake. You will need to extend the baking time range by about 5 minutes.